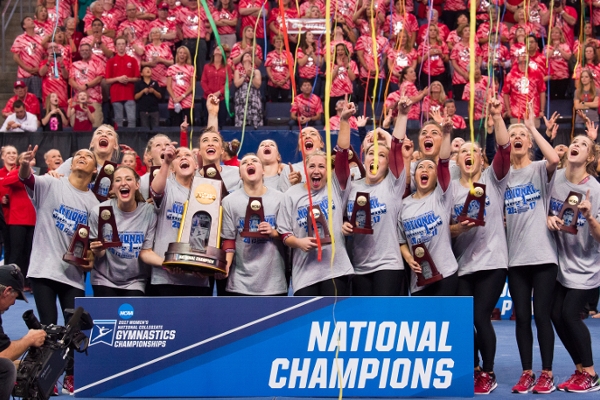 The season is right around the corner, and with the new year, a new set of capsule Season Previews of the Top 25, as ranked by the Coaches' Preseason Poll.  In each Preview, we've summarized the team's returning routines, their missing routines, the returning starters and the rest of their roster, including their newcomers.  We'll also give a brief overview preview of each squad.

The Preseason Poll is led by Oklahoma, the defending National Champions, who seek to defend their title.  They've won the last two team championships, and they'll look for a three-peat in 2018.  Maggie Nichols, AJ Jackson and Brenna Dowell will lead a strong lineup that will seek to make up for some graduation losses.  They'll be challenged by #2 Florida, who returns their entire lineup and who won the three previous titles prior to the recent Sooner reign.  With stars like NCAA AA Champion Alex McMurtry and Kennedy Baker combining with a superb class of frosh, they are the preseason favorites in many people's eyes.   LSU is #3, after a run last year for their first title.  They'll try again this season, but like OU, they'll need to replace some key lineup pillars.  Bama is fourth, UCLA 5th and Utah 6th in this year's preseason poll.  Bama hopes to offset some graduation losses with some key returning veterans and a talented incoming class.  UCLA may miss star Madison Kocian, but Kyla Ross is back to lead the way and frosh Nia Dennis is certain to make a big impact.  Utah's MyKayla Skinnner leads a veteran crew that should remain in Super Six contention.

As we explained in our brief story about the poll, the poll often closely follows either the team's National finish or their Regional Qualifying Score finish.  And, this year's voting was incredibly tight between places 9 through 15, with 100 points separating the teams.  While that seems like a lot, it's actually a narrow range.  With 50 coaches voting, and with one vote separating each place in the rankings, 100 points in the poll is the equivalent of two spots in the rankings.  Thus 7 teams were separated by the equivalent of just two spaces in the overall poll.  This likely reflects how tight it will be to earn a spot at Nationals.  While many coaches seem to recognize strong recruiting classes, they also aren't always privy to the extent of graduation and injury losses at some teams.  This can produce many surprises,

It was perhaps a historic year for coaching changes in the NCAA, with a number of Head and Assistant coaches changing spots.  These changes usually bring a renewed sense of energy at the school, and we look forward to seeing how these teams progress this year.  There will be challenges, and it's not uncommon to see transfers and early retirements following major changes.  We are seeing that already.

It's also the last year of the Super Six final, so a number of teams will get a final shot at earning a place in the Super Six.  Michigan and Denver are ranked 7th and 8th this season, and expectations are high at both programs after finishing 10th and 9th, respectively, in 2017.  Last year's #7 and #8 finishers, Nebraska and Washington, both look to close the gap in points to the Super Six qualifiers.  Each program finished 4th in the Prelims in 2017, where the top three advance, and finished less than a fall away from qualifying.

It's now been two years since the Yurchenko Layout Full and Layout Half have been downgraded to a 9.95 Start Value (and one year since the Yurchenko 1/2 to front layout), and we're definitely seeing more and more teams incorporating alternative vaults in their training and in their recruiting.  Many teams are working to get more 10.0 Start Value vaults in their lineups.  Likely this season, the qualifying members of the Super Six will put up at least three 10.0 Start Value vaults in their lineup.  And it seems as if both Florida and OU are very capable of having an entire lineup of 10.0 start value vaults.  Many coaches are also realizing that judges across the nation are consistently being more lenient on the Yurchenko 1 1/'2 (in layout) in their scoring evaluations.  The judges generally have shown at least 0.05 of a point in extra permissiveness in pre and post flight form (body position, soft knees, leg separations) or post-flight dynamics (height, distance), and a kinder approach to landing errors.  The effective spread in Start Value is really more like a full tenth or more in difference, making the vault less of a risk to include in the lineup.  In particular, a powerful athlete who has minor form issues might be better off competing a Yurchenko 1 1/2 with a step than performing a Yurchenko Layout Full with soft form and a hop.

As with every year, the frosh can make an unpredictable impact on a team's fortunes.  If you missed it, you can find our ranking of Recruiting Classes at this link.

Before we take a look at the Top 25, let's have a quick look at some teams that were ranked outside of the Top 25 by the Coaches.  Minnesota is #27, after a steep fall in the rankings after finishing #12 in 2016.  They had to battle to even qualify to Regionals, and eventually finished 30th.  The Gopher faithful are enthusiastic, with a superb frosh class headlined by future superstar Lexy Ramler.  WVU is ranked just 28th, after last year's 20th place finish.  Many of their stars return, and a solid incoming class gives them an opportunity to beat their Preseason rank.  Both CMU and Iowa State have a history of outperforming Preseason expectations, and find a way to post big scores during the year.  We're also watching the rise of ASU, with one of their strongest recruiting classes in years, featuring elegant French elite Anne Kuhm and powerful L10 Cairo Leonard Baker.  BYU is also on the rise, with stronger recruiting and the team's hard work paying off for Head Coach Guard Young.