Hannah Appleget, a L10 from Precision, has committed to Lindenwood for 2021-2022.  This past season, while training at Jersey Shore, she won the AA title in her session at the Pink Invitational and the Kick-Off Invite.

Published in Recruiting
Tagged under
Be the first to comment!
Read more...
Wednesday, 21 October 2020 15:50

Athena Koehler, a L10 from Redwood Empire, has committed to UC Davis for 2021-2022.  A former L10 Regional qualifier, this past season she won the AA title at the Gymnastics in the Wine Country meet and placed 2nd AA in the Delta Classic.

The NCAA Division I Council officially adopted a resolution to allow all Division I Winter sports athletes an additional year of eligibility, regardless if they compete this season or not.  If implemented in the same fashion as the waivers granted to 2020 spring and fall athletes, those seniors that return next year won't count against their school's scholarship limits in 2021-2022.  The additional year and scholarship are not guaranteed.  They are up to the school's choice, and likely dictated by budget.  If implemented the same as the rule in Division II, it appears that the relaxation of the scholarship limits does not apply to a senior that transfers schools for supplemental year of eligibility in 2021-2022.

Minnesota Board of Regents Finalizes Decision to Cut Men's Gymnastics

Sadly, despite a strong case, the Board of Regents of the University of Minnesota voted to cut Men's gymnastics, indoor track and field and tennis.  The motion passed by a 7 to 5 vote.  The Men's program had developed a counter proposal that showed a path to self-funding and the addition of a new women's sports paid for through a public club program.  Originally, the University had been expecting up to a $70M shortfall in their budget.  After the resumption of football, this deficit has been cut down to $30M.  Despite this positive changes, these thee sports were not spared.  Men's outdoor track and field has survived and roster cuts to other sports have been planned, but not finalized.  These cuts on the women's side may be lessened with the decision to save men's outdoor track and field.

UAA needs to raise $888K by February 15th, 2021 in order to save their program.  Please see the link below for ways you can donate or pledge. 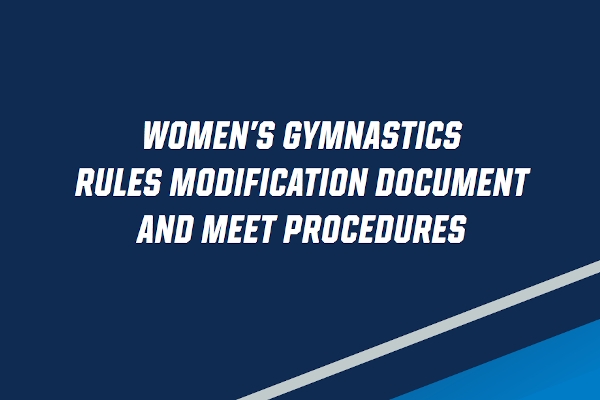 The NCAA Committee has released the Women's NCAA Code Modifications for 2020-2021.  Read below for the rules changes this season.  ** Spoiler alert -- they are minor **