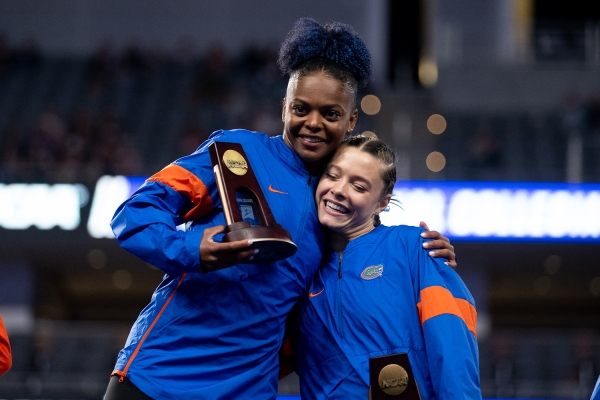 The 2023 is about to kick off, and we're anticipating a high flying season with plenty of record high scores.  We're once again publishing Season Previews for the entire Top 25 teams, as ranked by the Coaches' Preseason Poll.  In each Preview, we've summarized the team's returning routines, their lost routines, their returning starters and the rest of their roster, with a special focus on their newcomers.  We'll also give a brief overview preview of their prospects and challenges.

The defending National Champion Oklahoma Sooners are a favorite to repeat in 2023 and capture their sixth National Title this spring.  They return a string set of returners and welcome a dynamite frosh class, including former elites Faith Torrez and Ava Siegfeldt.  They look sharp and healthy in the preseason training period, and may even be stronger and deeper than they were last season.  They've improved on VT with more 10.0 Start Value (SV) vaults and added some key sets on UB, BB and FX that will help set a high standard for all of the others teams to chase.

Florida is ranked as the Preseason #2 and suffered some pretty large losses to graduation.  However, a talented roster, the addition of super elite Kayla DiCello, the return of Morgan Hurd and some key transfers means the Gators will be once again in the hunt for the title.  There is a long list of other contenders, including Utah, Michigan, LSU, Auburn, Bama and others.

Last season we saw some enormous rosters as gymnasts continued to take advantage of their extra year of eligibility.  Now two seasons removed from 2021 (the year that triggered the extra COVID year), we are seeing slightly smaller rosters as gymnasts move on with their professional lives.  The impact on recruiting has also been felt, as schools have sometimes held back scholarships in order to preserve a spot for transfers.  When you combine the extra COVID year with new transfer rules, we're seeing a lot more post-season movement.

With new treatments and boosters, and the establishment of a "new normal" in dealing with the disease, we likely won't see as many disruptions this season (knock on wood).  However, some teams could still be impacted by random illnesses.  Depth is going to be once again important.

As we highlighted in our quick review of code changes, the impact on the NCAA this season will remain relatively light.  With no major strengthening of the requirements, we are likely to see scores continue to rise and new records being set.  Whereas 196 used to be considered a good score to target for a Top 36 team, 197 has become a new target.  And teams that aspire for the National finals will need to target a 198.

One area we have seen an impact is the rule change for dismounts on BB.  The NCAA now requires a C level dismount off BB.  The D directly connected to B dismount became very popular in the NCAA, as it was easier to "sitck" and provided difficulty late in a routine, avoiding the progressive distribution compositional deduction.  With the new C requirement, we are seeing the revival of dismounts that used to be much more common in the NCAA:  This includes the gainer back pike, the gainer full off the side (often in combination with a back handspring for a bonus tenth) and the front full.

In a trend that began last season, the two pass floor routine has become the dominant choice on some teams.  During the preseason previews, we saw one show 80% of their floor sets with only two passes.  While reducing wear and tear on the athletes, it is leveling the playing field on FX and reducing separation between gymnasts.  This can also increase parity as it provides a path for more gymnasts to put forth a high scoring routine.  In order to achieve proper separation, the judges will need to be stringent in their evaluation of dance and acro execution (form, amplitude, body position, turn completion, etc), take 0.05 for progressive distribution where appropriate, and take the applicable artistry and execution deductions for lackluster choreography.

In this code modification update, the value of a switch side leap with an extra 1/2 turn was raised to a D.  While not easy, this particular leap may be a good choice for certain strong leapers.  Other D+ dance skills such as the Gogean (tour jete full), the switch ring half or D+ level pirouettes (double 90 degree L, Memmel, wolf, triple pirouette, etc) often earn deductions or even downgrades for incorrect body/leg/head positions, incomplete turns or loss of balance/control.  The leap also lends itself to natural combinations with a second jump, due to the high posture and natural rebound built into the landing.  Doing a D dance skill such as this one satisfies many requirements in the NCAA code:

Especially when used in a two pass routine, the "magic" qualities of this leap (in combination) has caused its rapid adoption by some gymnasts.

One change for this season is the introduction of direction lines or a "landing zone" on the landing surface for vault.  Like two sides of a parallelogram, the guide lines are a visual aid for judges and fans to assess directional errors with a vault.  In the preview meets already held, these lines have been very helpful in identifying directional errors.  As a side benefit, although they were not intended to assess distance, they make the overall distance of the vault more obvious as well.

Although this year some top seniors chose to forgo their bonus COVID year of eligibility, many others did return.  Thus of the Top 5 from 2022 in each event and the AA, only Ona Loper (Minnesota, VT), Lexy Ramler (Minnesota, BB & AA) and Sydney Soloski (Utah) did not return.

Here are the top five returners by event (based on final RQS from 2022):

That's enough about the changes, let's check out what's happening with the teams!  Here's our 2023 Preseason Top 25 Season Previews:

Tweet
Published in General News
More in this category: « Men's: Ribeiro Named Head Coach at Illinois Solorio to Retire as Head Coach at Sac St At the End of this Season »
Login to post comments
back to top
(c) 2001-2022 CollegeGymFans.com