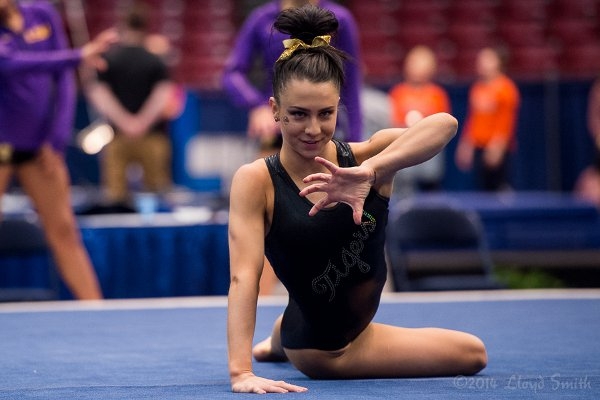 The SEC is one of the strongest conferences in women’s gymnastics to date. In the last 10 NCAA National Championships, an SEC team has won the title 9 times. Three different teams within the SEC have held the NCAA National Title: Florida, Georgia and Alabama. In last year’s Super Six (final 6 teams contending for the title), four teams represented the SEC. This year, all 8 SEC teams have consistently held a top 25 spot the entire regular season.

With talent, determination, and redemption at an all time high, this year’s SEC Championship in Duluth, GA will be a tight meet to the end.

By finishing in 2nd place at last year’s SEC Championship and just third in the regular season standings (based on win/loss records), the Gators are on a redemption journey. The defending Co-National Champion Gators have already jumped over LSU in the national rankings, due to the calculated RQS (Regional Qualifying Score) and some strong end of season scores. On March 6, in a meet against #1 Oklahoma, whom the Gators shared the National title with last year, Florida scored a season high 198.1. It wasn’t enough to win the dual meet, but 198.1 is a solid score that shows their capability to contend for the SEC title. Kytra Hunter, also a 3 time SEC gymnast of the week, has been a solid All Around contributor for the Gators each week. Junior Bridget Sloan continues to win the UB meet after meet with scores as high as 10, her collegiate high score, as she comes back from her early season injury.

After completing the regular season undefeated in the SEC, the Tigers are more than prepared to contend for the conference title. They come in confident in their abilities and deep in talent and Senior leadership. Seniors Lloimincia Hall and Jessie Jordan will continue to lead their team by doing what they’ve consistently done this season, hit and score big. Senior Rheagan Courville, a three-time SEC gymnast of the week, and sophomore standout Ashleigh Gnat will both contribute in a big way to the Tiger’s bid. In their last home meet of the season against Minnesota, the Tigers scored their highest team score at 198.375 and brought in a multitude of perfect 10.0s. In a sport like gymnastics, a title can literally come down to a hundredth of a tenth and coming off such a great high will only propel them forward. The Tigers have the experience, leadership and confidence to deliver when it counts.

In a last second bid, the Tide won the 2014 SEC title with a dramatic and impressive finish, overcoming the Florida Gators, who then went on to win the National title as co-champions alongside Oklahoma. First year head coach, Dana Duckworth, has molded an impressive Alabama team with hopes of defending their conference title this year. Lauren Beers and Kaitlyn Clark lead the Tide into the SEC Championship. In their final meet of the season, Alabama came close to edging out #1 Oklahoma with a small deficit of 0.225. With the sting of defeat still fresh in their minds, a motivated Alabama will come in strong to the Championships and have experience battling fellow SEC schools for the win.

Auburn has qualified to the coveted evening session after a strong regular season campaign.  They've been led by Caitlin Atkinson and Megan Walker, along with inspirational senior Bri Guy.  Guy tore both of her Achilles' last season, and has come back in remarkable fashion.  Auburn came just short of defeating Bama this year on neutral territory, and will look to defeat one of the top three seeds this year.  They'll also need to stay consistent and clean, as they've shown some weakness on the road, losing most recently to Kentucky.

The storied Georgia GymDogs come into the SEC Championship fresh off an upset win over the #4 Utah Utes. The GymDogs defeated the Utes at home and did so with vigor. Although the GymDogs haven’t had the best of luck against SEC schools this season, they put up a season high 197.40 in their last home meet and now have strong momentum going into the Championships.

As evidenced by Alabama’s last second win just one year ago, the SEC Championship will be one of the most exciting meets this season. Numbers mean everything in a sport such as gymnastics, but the team that can show consistency and hit every routine will ultimately come out on top. With each team posting season high scores near the end of the season, the competition looks to be peaking at all the right times. LSU is undefeated in the SEC, but Florida and Alabama each have the talent, ability, and experience to possibly claim the coveted SEC title.

The SEC Championship will be broadcast on ESPN2 March 21 from the Gwinett Center in Duluth, GA. There will be two sessions, 4 teams each session with the top 4 seeds competing in the second session. First session begins at 2pm and the second session at 6pm EDT.