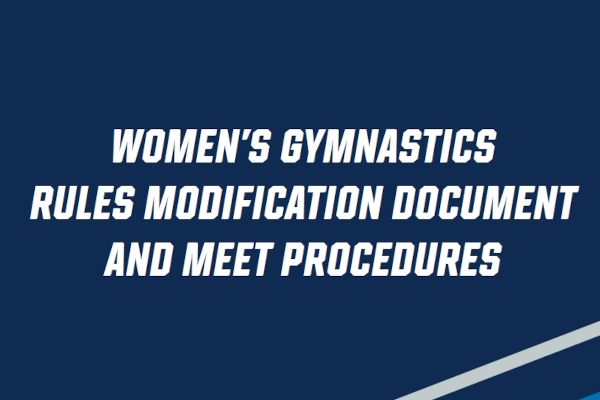 The NCAA has released the NCAA Code Modifications for 2022-2024.  These Code Modifications build upon the USA Gymnastics Women's Development Program (WDP) Code of Points.  The WDP Code was also just revised, in a major updated timed for 2022-2026.  Many will be disappointed that the NCAA did not strengthen the code and eliminate common loopholes, and help address the record-breaking scores we have been experiencing.  However, there are a number of changes, many of which do have the potential to increase variety.  Let's break them down.  *Editor's Note* This article has been updated with the publication of the Final Rules Modifications.

The NCAA Code Modifications generally change the value of certain skills, the special requirements and composition deductions.  Almost all skill values and the evaluation of execution follows the WDP Code.  This article presumes that you have a working familiarity with NCAA and USA Gymnastics L10 scoring.  We will be publishing an article in the future that breaks down the basics even further.  However for now, we'll take a look at the major changes.  Once again, these are the preliminary changes, and we'll update the article once the document is finalized.

The NCAA will be changing the timing of the Regionals, to split the four regions in pairs to allow for better broadcast and streaming possibilities.  This means two regions will be held on Wednesday/Thursday and Saturday while the other two will be held on Thursday/Friday and Sunday.  Teams like BYU that cannot compete on Sunday will be placed, if they qualify, in regions without the Sunday competition day.

A big change here is the addition of marking lines in the landing area, similar to those found in the elite ranks.  This trapezoidal or funnel shaped mark gets wider the further one lands from the table.  This should help with consistent enforcement of directional errors, currently rated at up to 0.3.  However, the NCAA did not add specific landing deductions for steps outside the area.

On VT, a few vaults changed in value:

The round-off on to the board, full twist onto the table and tuck salto off has been devalued to a 9.95 (the "Luconi").  The version in pike position remains a 10.0, and the change allows for recognition of the difficulty level.  This is not to be confused with the round-off 1/2 on 1/2 off to back tuck, which remains a 10.  Depending on the technique and execution, in real time these vaults can look substantially similar.

The front handspring tuck front with a 1/2 twist has been raised in value to a 9.95.  A similar vault, a front handspring 1/2 turn to back tuck (Cuervo tuck) has also been raised to a 10.  This change brings the NCAA vault ratings to be more consistent with the ratings in the WDP Code, where these two vaults had been raised.

A series of dismounts have been upgraded in the NCAA Code Modifications.  This includes the toe on front pike 1/2, raised from C to D.  Similarly, the stalder front tuck or pike with a 1/2 turn will be a D.  Finally, the same dismount from a clear support/hip or free hip will also be raised to a D.  This should help certain gymnasts that have trouble with flyaway style dismounts and had trouble previously finding a dismount that was "up to the level" (UTL).  The UTL deduction was taken if a dismount was not done in a bonus combination.  The change could also encourage more variety.

Also citing variety, the NCAA upgraded the value of a double tuck flyaway with a 1/2 twist from a D to an E.

The WDP Code also upgrades some skills with turns in handstand from C to D.  The toe-on to handstand with a 1/2 turn reverse, elgrip or mixed grip in handstand is now a D.  Similar skills in the stalder and clear hip/free hip position are also raised to D.  These are often combined with a front flipping dismount, Jaeger style release, or elgrip giants.  The raise D value gives additional bonus earning opportunity and may encourage variety in connections.

These changes, while encouraging variety, will also make it easier for some gymnasts to start from a 10.

One change on balance beam will require some off-season upgrade work for some gymnasts.  Last year, the special requirement for dismounts on BB required a gymnast perform either a C dismount or a B in direct combination with a D acro skill.  This season, the gymnast must perform at least a C dismount.  This change was made to bring the dismount requirement in line with the requirements on FX and UB.  The penalty for missing a special requirement is 0.2 points.  This change could mean we could see the return of many gainer pikes, gainer fulls off the side and front fulls.

The NCAA also upgraded the value of a back double full twist dismount from a C to a D.  This could lead some gymnasts to switch from the back 1 1/2 twist dismount.

A pair of leaps were upgraded.  The switch-side with an additional 1/4 turn is now an E, instead of a D.   Similarly, the tour jete with an extra 1/2 is also now an E, upgraded from a D.  This brings both leaps in line with a switch side 1/2 and could provide an alternative way to achieve "up to the level" on the event using dance instead of acro skills.  The switch-side 1/4 was already in use, and could provide a lucrative 0.3 in bonus with combined with a beat jump or hitch kick.

The underlying WDP Code has made some adjustments to the execution deductions.  In particular, the tempo deductions for series connections has been clarified to provide more distinction between a broken connection and a tempo deduction.

This clarification provides some additional clarification between a connection with a tempo deduction and the type of full stop of trunk movement, loss of balance or other movements that will result in a broken connection.

An artistic deduction has also been reworded:  "incorrect body alignment, position or posture on non-value parts" (throughout the exercise) is now subject to a deduction of "up to 0.3".

The NCAA modification have adjusted the criteria for choice of elements up to the competitive level (UTL).  the difficulty requirements are essentially unchanged, but the need to have a three element series has been dropped.  Some gymnasts have been caught lacking a three element series, especially those tumbling directly from a run or from a roundoff.

The NCAA also eliminated the bonus offered to Gym/Acro/Gym combinations.  Previously, a gymnast could earn bonus by combining dance in combination with two acro skills, as long as one of those was a C.  For example, a gymnast could do a Rudi to straddle jump to punch front and earn 0.2 in bonus.  She would garner 0.1 for the Rudi to straddle jump and another 0.1 for the punch front.  This bonus for the third skill is now eliminated.

The NCAA also elevated the switch side with an extra 1/2 turn from a C to a D.  This will provide another D dance opportunity for gymnasts seeking bonus or ways to add a dance D for UTL.

The underlying WDP Code made some larger changes.  They added some new bonus opportunities for indirect salto connections.  These are as follows:

These new combination bonuses should encourage more variety.  They will also offer options in two pass routines to more easily fulfill the difficulty requirements.  The most intriguing change could be the B indirect to D.  Gymnasts could opt to connect an Arabian step out or layout 1/2 step out into a double tuck or Rudi to earn 0.2 extra bonus points.  Another possible qualifying combination is a front layout step out to double tuck.  This change also enables a gymnast to avoid adding another B+ skill in the routine to meet the basic difficulty requirements.  Last season, a number of two pass routines were missing a third B level skill to meet the basic difficulty requirements in a routine.

The NCAA has eliminated the 0.1 team deduction for a failed video review.  This could make video review more common during score inquiries.  However, the NCAA also added a provision for the judges to review the newly credited skill or connection, and to take appropriate deductions for incompletion or rhythm.

Here's a copy of the NCAA Code Modifications:  LINK

Tweet
Published in Articles
More in this category: « Season Wrapup: Impressions of a Record Season
Login to post comments
back to top
(c) 2001-2022 CollegeGymFans.com