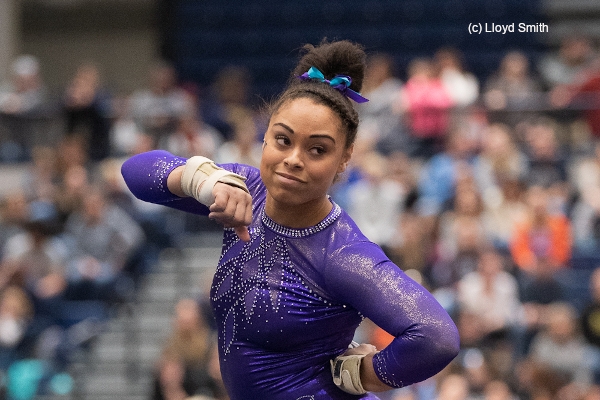 Graduation has completed throughout the country.  Congratulations to all the graduates!  Here's a look at the graduation losses at each squad in the final 2020 Top 16, based on the 2020 Final national finish.

Routines lost are based on the last meet of the regular season.  (I) indicates the gymnast was out of the lineups at the end of the season due to injury.

The loss of Nichols can't be understated, as the superstar left her mark on NCAA gymnastics history with her grace, poise and courage.  The two-time NCAA AA champ continued to wrack up 10s her senior season, despite ongoing knee issues.  Her teammate Degouveia had her best season as a senior, adding UB to a great effect to star on three events for the Sooners.  Showers unfortunately battled injuries throughout her career, after competing on up to four events.

The Gators will miss key contributions and leadership from their senior class.  Hundley in particular was an AAer at times, known for her steady contributions on all four events.  The elegant Gowey was a key end of the lineup routine on UB and BB, contributing on three events as a senior after competing AA as a frosh.  Alexander was primarily a VT specialist, while Chant battled injuries much of her career, contributing mostly on VT and UB.

UCLA has experienced some big losses to graduation, led by superstars Ross and Kocian.  Ross and Kocian ended their storied careers as the only two gymnasts to win Olympic, World and NCAA team titles.  Ross was on track to having a remarkable senior season, after having scored 10s on every event during her career.  Kocian overcame persistent injury issues to contribute on three events.  Hano was also a key member of the lineups, and competed AA as a senior.  Grace Glenn marked her first 10 on BB this past season, and Kramer received one of her own on FX.  Anna Glenn battled injuries but contributed on VT and UB, while Toronjo was in and out of the UB and FX lineups due to both injuries and illness.   The Bruins are losing a lot of "end of the lineup" routines and a lot of leadership and depth.

Reinstadler's elegant presentation and long lines will be sorely missed in the Ute lineups, as will her potential AAer capabilities.  Tessen shone brightest on UB and VT (with a 10 this season), but also hit career highs on FX this past season.

Edney was a major force in the AA for the Tigers, and a former NCAA VT champion.  Harrold competed on up to three events, but excelled on the UB where she was known for her unusual skill selection.  (Edney missed the last meet but is included in the totals here as the AA was an integral part of the lineup the previous week.)

Karr was a rock in the Pioneer lineups, a key AAer for DU since she first stepped onto the mats.  She won no less than 106 event titles during her storied career.

Bama loses three key seniors and their experience and leadership.  Mahoney was a key gymnast on up to three events, but was especially strong on UB.  Desch, a former World Championship Gold medalist, had some of her strongest contributions as a senior.  Childers was slowed by injury but competed as an AAer earlier in her career.

Cal loses just one senior from their active roster.  Mastrangelo came back from an injury early in her career to compete upgraded sets on VT and FX as a senior.

The Gophers lose five seniors, led by UB and BB ace Ivy Lu, a 10.0 threat on both events.  Her grace and execution helped elevate the Gophers back on the national radar. Williams competed as an AAer earlier in her career, and was a key end of the lineup performer on FX.  Quaglia was a dependable depth performer on VT and UB, while fifth-year senior Korlin-Downs excelled on BB.  Betts battled injury as an underclassmen but contributed as a senior on up to two events.

The Huskies suffered the largest losses of any team, with four All-Americans graduating, including key "end of the lineup" routines on every event.  They also lose quite a bit of leadership and experience.  Roberson was one of the top AAers and BBers in the NCAA this past season, with two 10s on BB.  Hoffa and Washington excelled on the FX, with the latter adding the AA as a senior with a brand new vault.  Hoffa came back for a fifth season with some of the finest tumbling in the NCAA. Copiak was a two-time All American on UB and like Nelson, contributed on up to three events.  With ongoing depth issues, the Huskies are left with some very large shoes to fill.

UGA loses two potential AAers and some key scoring potential to graduation.  Vega competed on up to four events for UGA, but was a key anchor on BB and FX, with the potential for a 10 on both events.  Dickson was a key AAer before suffering a season ending injury this January.  Dickson is eligible for a fifth year, although it is not clear at this time if she'll be returning to the Gym Dogs.

Korth joined the Wildcats in January of her frosh season, after graduating early from high school.  She had an immediate impact as a frosh and didn't slow a bit throughout her four seasons at UK.  She'll be especially missed on VT and FX.  Poland was a key member of the BB and FX lineups, while Kwan provided depth on VT and UB.

Porter completed her fifth season as a top AAer, upgrading her sets to provide leadership and high scores for the Mizzou squad.  Tucker's loss is a bit understated here, as she competed as an AAer during her career before an injury slowed her senior season.  Nicholson was a key member of the BB and FX lineups before missing her senior season.

The Beavers lose no less than 7 gymnasts, making up for at least 10 routines in their last lineup.  The team received a boost when Lacy Dagen was approved for a sixth year, as she was a key contributor on VT and BB.  Most of the graduated seniors were specialists, but with Gill doing the AA at times and Lowery starring on up to three events.  Lowery was a fan favorite and a key end of the lineup gymnast on FX, while Lazaro and Briscoe served similar roles on BB and UB, respectively.  Minyard was a key contributor on UB and BB while Davis was in and out of lineups on up to three events, but led off on BB much of last season.  The Beavers lose quite a bit of experience and depth that goes beyond the 10 routines lost.

The loss of Evans is somewhat understated here, as an injury kept Evans out of her typical AA slot.  The former All-American on UB was a viral fan favorite on the FX.  Pearson was a key contributor on FX and battled for the lineup on BB and VT.  Zhong missed her senior season with injury, after competing primarily on VT and UB.