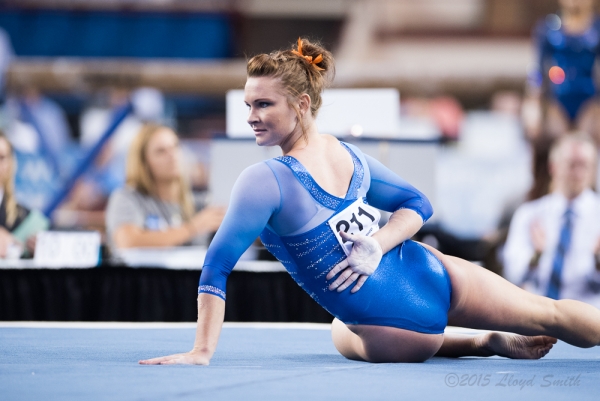 The season is well underway and we're already seeing some trends, early leaders, and stars begin to emerge.  Here's a few observations on the season thus far...

Let's discuss the obvious:  despite the best efforts made during the offseason by the NCAA and the Judges Association on training and establishing norms in scoring evaluations, we're seeing a small increase this season in variances in scoring evaluation.  Simply put, some judges are more lenient than others.  Yes, it's very early but the first meets showed large variances in the strictness of routine evaluation, made all the more obvious through increased video and TV coverage.  This variation can occur in a single meet, in a single event, and anywhere in the country.  However, it appears to be especially problematic with less experienced judging panels and in certain regions or even specific locations.  It's not a universal situation in any given locale.  It can happen even within the same meet.  In fact, in several early meets, there were long delays between routines as judges settled on scores that were too far apart.  Inflated scores can lead to inflated rankings and can distort the Regional qualifying process.  In the past, these problems have tended to get moderated by the "mixing effect" and the requirement to count three "away" scores in the Regional Qualifying Score (RQS).  The "mixing effect" refers to the switchup in judges that occurs naturally during the season.  Later in the season, judges will "max out" on the number of times they can be placed with certain schools/locations and we'll begin to get a new set of judges evaluating the different teams.  This produces a natural turnover in the judging panels.

Florida and OU have established themselves early on as strong candidates, but this was not unexpected as they were the preseason favorites.  For Florida, Alicia Boren, as expected, as established herself as an early star, while Bridget Sloan remains a rock.  OU is showing their continued excellence, and always seems to start with strong, consistent and clean routines.  Michigan has also made a strong move early on, and looks to continue its momentum and to challenge the top squads.  A lack of depth and some inexperienced frosh are their biggest challenges.   UCLA is known to be a slow starter, but they've shown strength early in the season.  Unlike recent seasons, the Bruins look to be among the strongest teams on BB, with unique and difficult sets.  To challenge the top squads, the Bruins will need to work on their power on VT and FX and clean up their UB.  A young LSU squad struggled this past weekend on BB, but has shown some tremendous difficulty and depth on the other events.  They will only get better as they gain meet experience, and the intense crowds of the SEC are no better preparation for the rigors of competition.  Bama is not to be overlooked, but has some cleanup work on certain events.  They will really benefit from a healthy Lauren Beers.  She's had a number of offseason injuries/surgeries and is having a slow start.

Bridget Sloan of Florida and Elizabeth Price of Stanford have staked early claims as gymnasts to watch in the NCAA All Around battle.  Neither has a large single weakness although both may seek to upgrade their vaults.  In the end, it'll come down to fine points of execution in the final meet.  Sloan has entered her final campaign with some upgrades in place, including a new back layout 1 1/2 twists through 2 1/2 twist mount on FX.  Price did not do AA until the very end of last season.  She's picked up where she left off, retaining one of the toughest UB sets in the country (including a Maloney to uprise to free hip handstand to Church to overshoot 1/2 to handstand to toe-on straddle hecht to high --- a D - C - E - D - C combination).  There is a large pack of contenders, and time will tell if someone else will be able to challenge this pair.

Some teams have made impressive debuts to the season, making their claim for a Top 25 spot.  These rising stars include Arkansas, who looks solid and strong on every event, although depth on VT could be an issue.  Although they don't have many post season 9.9+ level routines, they have a lineup that can compile a strong series of 9.8+ routines.  And, select upgrades will raise their scoring potential.  George Washington has made a strong start, powered by their standout sophomores Cami Drouin-Allaire and Jillian Winstanley.  As a team, they are weaker on UB, but have made great strides since last season.  Missouri has also shown great improvement, getting strong starts from their frosh class, including Britney Ward.  Consistency and hard work is paying big dividends for some teams early on in this season, including the ability to avoid the large obvious mistakes like steps, out of bounds deductions and major wobbles.  Other teams, especially those experimenting with upgrades, are having some consistency issues.  Surprisingly, some of the strongest moves have been made with team that are relying heavily on frosh.

Much attention has been paid to the devaluation of the start value of the Yurchenko Layout Full from a 10.0 to a 9.95.  One of the interesting by-products of the change in the vault start values is the early experimentation we're seeing in the lineups of the top teams.  Some athletes are throwing different vaults, to see how they will be evaluated.  In the, past gymnasts like Haley Scaman of OU have been throwing fantastic layout Yurchenko fulls with early openings and stuck landings.  Last weekend, Scaman threw a Yurchenko 1 1/2 instead.  She's always been capable of this skill, but it wasn't worth the landing risk.  She took a step last weekend but still scored a 9.9.  Getting a 9.9 on a layout Yurchenko Full has been very rare, no matter how well its performed (Florida's Alex McMurtry the obvious exception).  There are two unfortunate side effects of this change, however.  Judges seem to be evaluating the Yurchenko 1 1/2 more leniently than the Yurchenko layout full.  And, we're seeing late turning Yurchenko Arabians/Hristakaevas (Yurchenko 1/2 off to front layout) scoring as well as the harder vaults.   That second loophole needs to be closed next season.  Fortunately, we've yet to see anyone attempt a pike Yurchenko Full, which was left at a 10.0 in the code.

Another big change in the NCAA is the greater emphasis on big releases (two Ds or one single bar release) and E skills on the UB.  This is the so called "up to the level" compositional deduction.  We're seeing most gymnasts respond to the change by doing some type of single bar release.  This has not been a big issue for most gymnasts or teams, although in a few cases gymnasts that used to do only one non-single bar release have been impacted.  This was the desired effect and it adds some excitement and risk to the routines.  The case in point?  Alex McMurtry of Florida.  Last season she did an UB routine that relied on an overshoot 1/2 to handstand and toe-up straddle hecht to high bar for her releases.  It scored 9.95 in the Super Six Finals, despite the lack of a big release and the "stock" construction.  This season, she's added a super high Ray release and has a much more interesting routine.

We're also seeing some execution issues on these releases, primarily in amplitude above the bar (and upon regrasp), sufficient counter rotation in Tkachevs and in the distance from the bar.  These issues are not being evaluated with the same rigor by each judging panel.  The rule change also eliminated a way to satisfy the "up to the level" difficulty requirement through a pirouetting combination.  The unfortunate outcome of these two changes is the development of a new "NCAA compulsory".  This UB routine contains a blind change to Jaeger, directly connected to an overshoot (or with an overshoot 1/2 from an intervening handstand), and a double layout/full-in/giant full to double tuck dismount.  Every team in the country has this routine in their lineup with only minor variatons, and in many cases, they have multiple instances of this same basic "compulsory".  This is definately an unintended consequence of the rule change and not a positive trend.  However, this routine meets all the requirements for composition and the code leaves the judges with very little lattitude to separate the routines.

And The Change with the Biggest Impact?

With all the attention paid to the start value of the vaults, and the new rules encouraging single bar releases, perhaps one major change has been overlooked by fans.  And for teams ranked 12+, it perhaps has had the biggest impact on their scores.  The "up to the level" compositional deduction on the floor now asks the gymnast to perform an "E" skill or two D skills, including a D salto.  This has proven to be more of a challenge than you might expect.  We're seeing more second D saltos in the lineups, for one thing.  However, in some cases, teams are taking the 0.1 deduction rather than risk another "D" skill (tumbling or dance) in the routine.  This means some teams are capped at a 9.9 score on FX -- in effect, this has a bigger impact on a gymnasts score than the vault start value change.  One Preseason Top 25 team opened their first meet with four floor routines that were capped at 9.9.

A few top gymnast who are not strong tumblers are using dance skills like the double turn with leg held at horizontal or the wolf jump 1 1/2, to get their second D.  This is also inherently risky -- a slight drop of the leg or an incomplete turn will cause the loss of the bonus and incur an "up to the level" deduction.  Of course, adding extra tumbling "D" skills also comes with increased risks:  a step, flexed/crossed feet, or a low chest on landing can quickly cause more deductions than are avoided by attempting the harder tumbling.  This also may not appear in the gymnast's score until the critical post-season meets, where judging tends to tighten up.  The ability to avoid the 0.1 deduction has leveled the competition for lineup spots between the gymnasts with cleaner execution and those with stronger tumbling.  The coaching staff is left with some tough decisions on which routines to compete, and we already see different strategies in play.  Finally, some gymnasts that are strong tumblers struggle with the finer points of dance, like flexibilty, amplitude, toe point and expression.  For example, some gymnasts with stronger tumbling struggle with the flexibility required to hit a 180 degree split or with showing the same degree of expression as a gymnast who excels in dance but lacks power.  As a result, dance execution, leg form, flexibility, toe point and expression has taken a hit on some teams.  Of course, teams that were already performing this level of difficulty are largely unaffected.

Tweet
Published in Articles
More in this category: « Fall Updates: Lineup Spots Up for Grabs March Madness, the Tumbling Version »
Login to post comments
back to top
(c) 2001-2020 CollegeGymFans.com