Month Two: The Race Heats Up 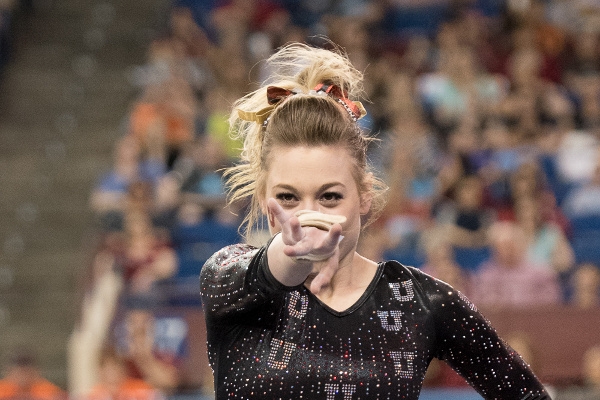 Two months have passed and things have shaped up for an exciting stretch run to Regionals and Nationals.  With the switch in the rankings by Regional Qualifying Score, some clear trends have emerged.   Here's a recap:

Oklahoma started fast out of the gate and hasn't slowed down.  With huge scores already in the books, Oklahoma has a stranglehold on the top spot.  With superstar Maggie Nichols leading the way, the Sooners have been clean, consistent and pretty much unflappable.  While yes, they do not compete with as much power and difficulty on VT and FX as some of the other squads, they have dialed in an optimal mix of difficulty and execution under the current set of rules.  With a strong core of Nichols, Chayse Capps, Brenna Dowell and AJ Jackson, the Sooners have looked ready for St. Louis since Day 1.

The LSU Tigers started fast out of the gate, but have slowed a bit at mid-season.  Led by Ashleigh Gnat, Myia Hambrick and Sarah Finnegan, LSU puts up some of the most eye-catching sets in the NCAA.  They compete with a high level of difficulty but have also experienced some inconsistency as a result, which may have caused them to fall a step behind the Sooners.  Their BB can be stellar, and they are capable of putting up a powerful lineup on VT and FX.  But major breaks, form issues and steps sometime creep in, especially on the UB.   These are issues that LSU will look to polish up so they can close the gap on the Sooners.  The Florida Gators have been building all season, and have posted an impressive series of scores.  This edition of the Gators features some powerful routines in the back half of the lineups, with Kennedy Baker, Alicia Boren, Alex McMurtry and frosh Amelia Hundley forming a solid core.  The Gators will need to shore up their depth in the fifth and sixth spots, and continue to work the fine details on UB and BB.

When UGA's Karin Lichey hit the first Perfect 40 AA, many felt we would never again see such a feat.  With Maggie Nichols meeting or exceeding every lofty expecation set for her, a Perfect 40 all-around tally seems within her grasp.  With 10s on three events and a high of 9.975 on UB, it could just be a matter of time.  With a score of 39.925 already in the books, it seems almost inevitable that she will score a 40.  She's the clear cut favorite for the NCAA AA title:  she has no weak events, is supported by high scores preceding her in the lineup and has eliminated most of the obvious deductions from her sets.

While OU and LSU have captured the National attention, Florida has slowly risen up the rankings to close the gap on LSU.  With Kennedy Baker, Alicia Boren and Alex McMurtry leading the way, this edition of the Gators compete with more power on the leg events than the last two seasons.  The frosh have been coming along nicely, and hopefully we'll see the Gators continue to clean up their sets on UB and BB, where their overall execution has not yet been to the level of OU.

Unfortunately, this year we've seen more than our share of injuries.  In particular, the large number of Achilles' tendon ruptures has drawn some scrutiny.  With various injuries to key athletes like Arkansas' Amanda Wellick, Cal's Toni-Ann Williams, Missouri's Morgan Porter and Utah's Sabrina Schwab and Kim Tessen (and unfortunately many, many others), teams are feeling the impact of unexpected injuries.  At one point, Utah looked ready to challenge the leaders by the end of the season.  Two major injuries later, their depth issues have been exposed, in particular on UB.  UCLA has also been heavily impacted by injury: both Anna and Grace Glenn are out with identical injuries and numerous key gymnasts have been out with injury in the first part of the season.  Although they are now working their way back into the lineup, the Bruins are clearly behind the lead pack as well.

Who Will Be Super?

Besides Utah and UCLA, Bama has made a strong claim for a return to the National podium with a win over Florida.  They've lost star Mack Brannam for the first part of the season (clean up surgery on her ankle), and her absence has been felt, especially on VT.  As Bama's injuries heal and their frosh gain more experience (and recover from their own 2016 injuries), we'll likely see them continue to improve.  What has changed from the first part of the season is that the gap between the top 6 and the rest of the field has narrowed.  This next group is led by Georgia, Denver and Michigan.  The Wolverines, after a slow start, are looking stronger and stronger.  With strong VT and tumbling, they could be a threat to knock one of the favorites out of a spot in the Super Six.  However, they have depth issues of their own, especially on UB where form and execution in the 1H of the lineup lag the leading squads.

Traffic Jam in the Nationals Race

After the current top 9, there are 9 other teams separated by just a half a point.  What's more, there is a long list of other teams (10 to 15 or more) capable of pulling an upset at Regionals.  Even teams in the current Top 9 do not appear to be "safe".  We're seeing strong performances from the likes of Kentucky and Boise State, while Oregon State continues to build out their depth.  Keep a close eye on Regional hosts Nebraska and Washington -- they'll have a built-in home gym advantage at Regionals and they will seek to improve their ranking in the coming weeks as they continue to build consistency and improve execution.

The Soft Bottom and Accountability

Scoring has been a hot topic this season.  With the proliferation of dedicated conference sports networks and online video, fans are now fully exposed to the full range of variation of scoring rigor across the country.  While it is true certain school locations or conferences have been known for lax scoring, no one school or conference holds a monopoly on overscoring.  While less-than-perfect 10s get a lot of attention from fans, the bigger transgressions often occur at the low end.  Routines with multiple mistakes or less than stellar execution are softly evaluated, leaving scores 0.2 tenths or higher than the established norm.  Just 0.1 of overscoring per routine results in a team score that is inflated by 2 full points.  In terms of team RQS, that's the difference between 10th and 38th place in the rankings.

Every season we usually see one missed fall or major error.  We've seen two thus far.  The current system of accountability is not working.  We need a better solution that gets the coaches and meet referees out of the process, with independent auditors and qualitative evaluations.

Scoring is much more than falls, steps, hops and even missed handstands.  Here's a few of the areas that aren't always obvious to fans.

Vault: In general, vault scoring uniformity has improved this season.

UB: Bars remains an even where we see a wide range of scoring.  While much attention is paid by commentators to handstands, steps, leg separations and flexed feet, the judges actually have a wide range of tools available to separate the routines.

BB:  While balance checks, steps and falls are obvious areas of deduction, there are many more places to deduct

FX:  While steps and landings get a lot of focus, fans should look out for

There are many more deductions that can be taken in a routine, but many are not taken as there is a generally unwillingness to award sub 9.5 scores to athletes without a medium error.