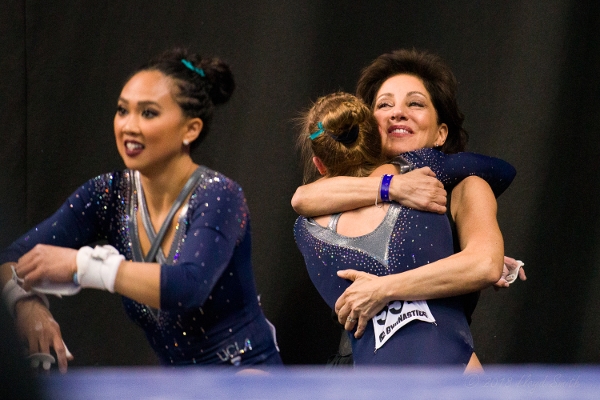 The season is right around the corner, and with the new year, we have a new set of capsule Season Previews of the Top 25 teams, as ranked by the Coaches' Preseason Poll.  In each Preview, we've summarized the team's returning routines, their missing routines, their returning starters and the rest of their roster, with a special focus on their newcomers.  We'll also give a brief overview preview of their prospects and challenges.

A big seismic shift is hitting the NCAA this season in the form of a new post-season format.  In past seasons, teams have qualified to Nationals by ending the regular season ranked in the top 36, as calculated by the Regional Qualifying Score, or RQS.  The RQS is calculated by taking a team's top three away scores and combining them with the three next best scores.  The high is discarded and the remaining five are averaged to determine the RQS.

In the past, six Regions of six teams each were formed, with the Top 18 teams seeded "in trios" and assigned to Regionals according to a set criteria.  The remaining qualifiers were distributed to the Regions in a process that uses key criteria such as geographical proximity and conference affiliation.  The top two finisher in each Region advanced to Nationals.  At Nationals, two sessions of six teams were held.  Three teams advanced from each session to a Super Six final.

This year, 36 teams will still qualify to Nationals using the RQS score.  However, there will be only 4 regions and 16 seeded teams.  The first night of the Regionals will include a "play-in" dual meet between two of the teams that finish in ranks #29 to #36.  The winner advances to the second day.  On day two, there are two sessions of four teams each, with the top two advancing from each session.  On the third and final day of Regionals, the four teams battle for two spots at Nationals.   Similarly, at the National finals, 8 teams will be divided into two sessions.  The top two from each session will advance to a final.  See the complete explanation here:  Link

This change could potential impact the competitive climate beyond just the new mechanics of qualifying.  The new procedure puts an even greater emphasis on consistency, with back to back meets in the Regionals that will test the teams' endurance (Regionals will run Thursday through Saturday).  While the Top 16 seeds will be important, the need to be in the Top 28 will be even more critical.  Another night of competition will make for a potential third consecutive night of competition for the unlucky team.  Because of this, teams may approach the balance between consistency and difficulty more carefully, in particular during the post-season and the first night of Regionals.

The new format will also allow more individual specialists to qualify to Nationals, even as the total number of teams and individual All-Arounders get reduced.

Don't Wait for these Code Changes

Periodically USA Gymnastics makes changes to the Junior Olympic Code of Points for Level 10, the rules on which the NCAA issues a series of modifications.  The NCAA modifications mostly focus on differences in special requirements, composition deductions and skill value differences.  The NCAA accepts the balance of the JO Code of Points and any underlying changes, unless a specific modification is made.  This year, the underlying code underwent a change in the way that so-called "concentration pauses" are evaluated on BB.  Last season, a gymnast who paused more than two seconds before a skill or series of elements was deducted 0.1 points.

For this season, that deduction has been expanded:

A similar deduction on FX also occurs for pauses of two seconds or more.  In a sport that is used to battling over 0.05 and where the top four teams finished less than 0.25 points apart last season, this is potentially a big deal.  While this emphasis on flow and stops has existed in the elite world for quite some time, the L10 gymnasts and NCAA competitors have been used to working the full 2 seconds before the deduction was applied.  And, now this deduction carries double the potential penalty.

To avoid this deduction, teams generally will have to train to have any concentration pause last just over one second, to avoid any doubt or differences in evaluation between judges.  A simple one count or deep breath is about all the time that can be afforded.  What's more, on 12/15/18, the NCAA Rules Interpreter further noted that the time period for this pause can be initiated either when the athlete is actually stationary or when the gymnast is "readjusting arms, feet or body prior to initiating an element".  A quick scan of preseason BB routines showed that many gymnasts are either not prepared or insufficiently prepared to avoid this new deduction, if it is taken as directed.  Since the judges will also be new to this change, you can expect a lot of confusion early in the season as athletes, coaches and judges get used to applying this change in evaluation.   However, although this deduction may seem to be disturbing to some, it's not a new rule rather but rather an enhancement of emphasis of an existing deduction.

That's enough about the big changes, let's check out what's happening with the teams!  Here's our Preseason Top 25 Season Previews: