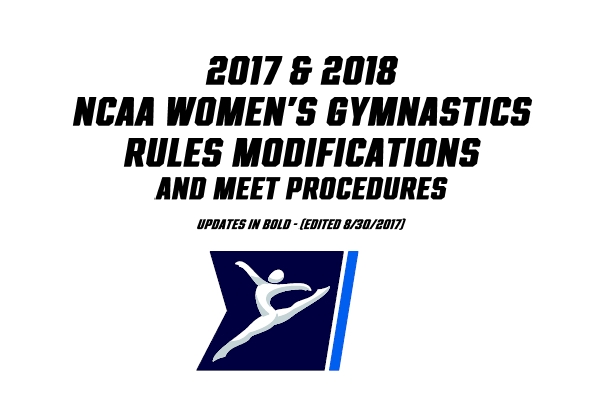 The NCAA Modifications (W) for the 2017-2018 have been published and with them, a few changes are worth noting.  However, if you were looking for some bold updates, you'll be disapointed.

The NCAA chose only to make minor adjustments to the code.  We'll have to wait until next season for a more dramatic update.

The NCAA has added a series of vaults that start with a front handspring onto the board and are followed by a Tsukahara-type vault.  This echoes a change to the USA Gymnastics Junior Olympics L10 Code, where a new vault was added (the "Zuhlke", a version in pike position).  For example, a front handspring to pike Tsuk 1/2 is now worth a 10.0, as is a similar vault with a tuck-full (an even more popular vault in a traditional entry).  We'll see if any gymnast attempts these vaults next season.  We have not seen a significant increase in front handspring entry vaults, however.

There were no substantial changes made for this season, unfortunately.  The same "golden" routine variants with short routine construction and little connection variety will continue to be popular.

The biggest single change occured on this event.  The popular front-aerial to back handspring (stepout, two foot and swing down) series has been downgraded.  Last season, this combination yielded the gymnast a "D" (0.1 point bonus) plus a connection value of two tenths.  Now, this combination will only receive credit for the "D", a loss of 0.2 in bonus points.  What's more, this combination no longer satisfies part of the "up to the level" compositional requirement for the NCAA, which means the athlete will need to add another D+ Acro skill, D+ mount/dismount or E dance skill in the routine.  The gymnast can, however, still earn a triple series bonus (and combination bonus) by adding a third skill to the series (like a backhandspring or back layout).  Also, front aerials to other acro skills still earn combination bonus, like a front aerial to back tuck.

However, the NCAA did leave a small loophole, unfortunately.  It appears that the kickover front (front tuck from one foot takeoff) to back handspring combos will still earn the extra 0.2 in bonus.  This skill is often considered easier than the true front aerial, but is a related skill and almost as popular as a high-bonus series.  While some would argue that the two foot landing is harder to connect into the back handspring, it does not appear to be worth 0.2 more in bonus tenths.

Gymnasts who used to rely on the front-aerial to backhandspring series last season will need to find another 0.2 in bonus this fall.  If they keep the series, they will need to include another D acro skill (or mount/dismount) or E dance skill (like switch split 1/2).  Or, they could convert to a series that still earns combination bonus.  For example, a front aerial to back tuck or a kickover front to backhandspring.

Like in elite gymnastics, the split jump 1/2 turn in the side position is now rated as a D in the underlying JO Level 10 code.  This change will carry forward to the NCAA (along with any other changes through November).  This leap, and the related straddle 1/2 in side position (already listed as a D), have become noticeably popular in the elite ranks.  The underlying JO Code of Points also clarified connections in dance/mixed and acro series, including how the free leg and trunk movement help define a valid connection.  In a dance/mixed series, a free leg that is held above 45 degrees upon landing of an element (such as in a cap leap or hitch kick) cannot drop and rise again above 45 degrees nor can the forward trunk movement stop.  In an acro series, a free leg cannot swing up beyond 45 degrees into the next acro element (such as from a side aerial).

On floor, C to C indirect tumbling combinations now will receive 0.2 in bonus, rather than 0.1.  The most popular example is the back layout 1 1/2 twist step to round-off, back handspring, back layout with a double twist.  This pass was done last season by OU's Maggie Nichols and Utah's Mikayla Skinner, among others.

A Gap Widens (And Another Closes)

It's worth noting that USA Gymnastics does make certain changes to the underlying Junior Olympic L10 code each year.  In fact, they made a large change this past off-season, adding new requirements for "up to the level" that are generally tougher than prior generations of the code.  However, the NCAA has it's own set of "up to the level" deductions that are much easier.  Thus, the gap between the L10 and NCAA code has grown on UB, beam and floor.

Another small clarification in the underlying code may impact some gymnasts.  The JO code now requires that heels be brought together on all dismounts, even when the landing was made with their feet only slightly apart.  The deduction is 0.05.

And that's it!  For more changes in other policies, like video review, please see the full document linked below.

Tweet
Published in Articles
More in this category: « Showdown in St. Louis Gallery of 2018-2019 NLI Signees (Updated) »
Login to post comments
back to top
(c) 2001-2022 CollegeGymFans.com