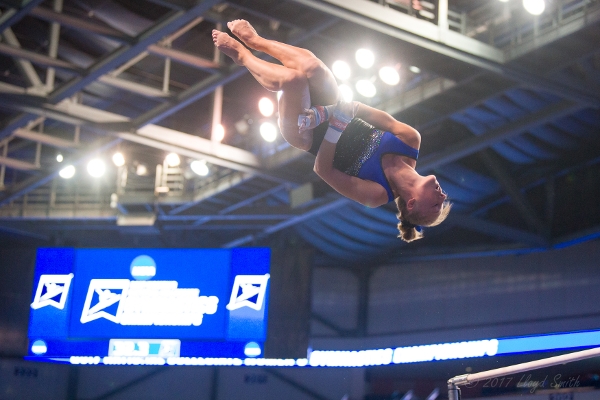 It's finally here!  12 teams gather in St. Louis this weekend to battle it out for the title.  First up are the National Semi-Finals, where the top three in each session will advance to the Super Six.  This year's Championships hold a special meaning, as next year the Championship will shift to a new format.  Here's how the meet is shaping up:

This could be the most competitive of the two sessions, with LSU, UCLA, and Alabama being the top three seeds, and with Nebraska coming off a super strong Regional performance.  These four squads will lead in the race to advance and it'll be tough to predict which of the three will prevail.

LSU has been led by a triumvirate of all-arounders:  Sarah Finnegan, Myia Hambrick and Kennedi Edney.  The trio are capably supported by a wide-range of specialists, including Lexis Priessman.  LSU just barely beat Nebraska at Regionals, and they'll need to avoid mistakes in order to advance.  They've been among the most consistent teams all season, but could get tested.

UCLA has been on the rise throughout the season, using a wide variety of gymnasts and finding the right combination of consistency and execution.  They are led by Kyla Ross, Peng-Peng Lee and Katelyn Ohashi, plus recovering star Madison Kocian.  This is the Bruin's best chance at a National title in several years.  Getting their landings on VT and avoiding mistakes on UB will be their keys.

Alabama had a very slow start to the season, and has risen into form at the end of the season.  Key injuries slowed their progress, and the rise of frosh Lexi Graber has been a key.  Veterans like Kiana Winston and Nickie Guerrero will need to be in top form for the Tide to advance.  Vault is another key event for the Tide, where they cannot cede too much ground.

Nebraska hopes to pull off a big surprise and advance to the Super Six.  The return of Taylor Houchin to full form has been a key difference maker for the Huskers, late this season.  She, along with Sienna Crouse, Megan Schweihofer and Kynsee Roby will need to be in top form.  Consistency has been an issue with Nebraska, and they'll need another lights-out performance to advance.

Arkansas returns to Nationals with a strong squad led by senior vets Amanda Wellick and Braie Speed, and the emergence of soph Sarah Shaffer as a new star.  Their difficulty and execution lags that of the top teams, and so they'll need mistakes from more than one squad in order to advance.

UGA pulled the biggest surprise of the Regional meet by advancing out of the "Regional of Death".  Despite problems early on, they preserved showing a strong competitive mettle so characteristic of Georgia squads of the past.  The challenge for Georgia is depth, particularly on the leg events.  Sydney Snead and Sabrina Vega lead the way for the GymDogs.

Rotation order may play a factor.  National meets often start with very tight scoring in the first round, and then progressively get worse.  LSU starts on BB, which can always be a challenge, but gets to end on UB, their strongest event.  UCLA gets the favored Olympic Rotation, starting on vault and ending in the last round on FX.  Bama may face challenges as tight scoring on UB could expose some form issues they've experienced on the event.  Nebraska starts on UB, an event where mistakes could come into play.

OU, Florida and Utah are favored to advance from this session.  If one of these teams should falter, any of the three remaining teams could advance.  This type of pressure can produce some unexpected results.

OU will be heavily favored to advance.  They are led by Maggie Nichols, frosh Anastasia Webb, Brenna Dowell and AJ Jackson.  The Sooners did show some vulnerabilities earlier in the season, experiencing a meltdown on BB.  However, if they keep their nerves under control they should be able to advance.  Once in the Super Six, they'll set the pace for the rest of the teams.

Florida has had an up and down season, marred by an injury to star Kennedy Baker.  They'll be led by defending NCAA AA champ Alex McMurtry, junior Alecia Boren and frosh Alyssa Baumann.  The Gators relative inexperience can produce mistakes, like their issues at the SECs.  They cruised through Regionals, however, with their best performance of the year.  At their best, they are still title contenders.

Utah will look to advance to the Super Six, where they hope to pull an upset and rise to the top of the podium.  They are led by stars MyKayla Skinner and MaKenna Merrell-Giles, two top all-arounders.  The Utes hope to leverage their strength on VT and FX to compensate for UB and BB, where they cede some ground to the top teams.

Kentucky hopes to maximize their stay at their first ever Nationals.  Led by stars Mollie Korth, Sydney Dukes and Alex Hyland, the Wildcats will look to take advantage of any mistakes from the top three.  They still lag behind the other squads in difficulty on FX, and will need to avoid mistakes on the other events.

Cal is led by star Toni Ann Williams and frosh Kyana George.  The Bears started the season slow, held back by inconsistency on UB and BB.  They'll look to leverage their strength on VT and BB while staying clean on their weakest event, FX.  Having Williams at full strength will be key, as she was held out late in the season to rest her knee.

Washington has been the most consistent team in the Top 12, leveraging depth and the lack of major errors to compile a series of high scores.  They'll be led here by senior AAer Hailey Burleson once again, as the Huskies look to sneak past one of the squads into the Super Six.  Unlike at Regionals, Washington will need to stick their landings on VT and UB to have even a chance.

OU has pulled the worst rotation, with BB first up, the only event in which they've experienced a "meltdown" this season.  In contrast, Utah gets the favored Olympic Rotation while Florida should be comfortable starting on UB.  Of the other three challengers, Washington has the worst draw, starting on FX and ending on a bye (and missing the final round scoring elevation).  Cal also finishes on BB, but must start on their weakest event, FX.  Kentucky gets to start on UB and end on VT.  They are coming off a strong 197.05 at the Regional meet, and look to leverage this advantage in the semi-finals.

Last season, Alex McMurtry took the title as pre-meet favorite Maggie Nichols shockingly fell on BB.  Both return and are in the favored evening session, where they can benefit from potentially looser scoring.  Along with Utes MyKayla Skinner and MaKenna Merrell-Giles, as well as individual qualifier Elizabeth Price (rotating with the Utes), the AA champ will likely come from this evening session.

Session 1 will also see some contenders, including UCLA's Kyla Ross and LSU's Myia Hambrick and Sarah Finnegan.  They do have a built-in disadvantage of being in the early session, although name recognition could provide a big boost to the well-known stars like Ross.

Historically, seniors have had an edge in winning the title, for a variety of reasons.  This gives the edge to gymnasts like McMurtry, Price and Hambrick.  However, big names like Nichols, Skinner, Finnegan and Ross can probably overcome this name-recognition advantage with some notoriety of their own.

Tweet
Published in Articles
More in this category: « Women's 2018 Regionals Preview Season Debuts: Up, Up and Away »
Login to post comments
back to top
(c) 2001-2022 CollegeGymFans.com