Season Debuts: Up, Up and Away 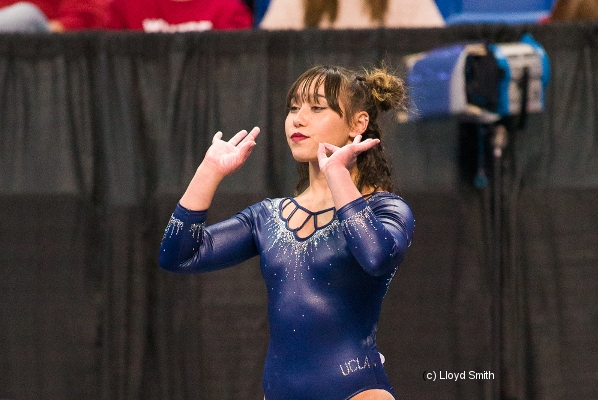 Someone May Have Sent You This Video (c) Lloyd Smith 2018, Used by Permission

We've got two full weekends of competition in the bag, and we're seeing some signs of an exciting NCAA season.

The season set off in a big way, with OU possibly setting an all-time NCAA opening meet score with their 198.05.  We can trace scores back to 2002 and did not find a higher result -- and 2004-2005 was the high water mark in scoring.  UCLA followed up with a 197.7 the second week, and we're off to the races.  Joining the race is Florida, who posted a 197.4 in their season debut last weekend, despite missing star Alyssa Baumann, who was held out after a hard fall in practice.  Joining this trio is Utah, who has posted two scores over 197.  The top four have already set themselves ahead in the early race to the Four on the Floor final.

Under the new format, just eight teams will make the National Semi-Final, an Elite Eight of sorts.  Last season, five teams broke away clearly from the field and the teams ranked 7 to 15+ could have easily finished in any order.  This year, we're seeing some teams that are usually very strong early on struggle through the first two weekends, while others appear have made large gains.  Right now, it's impossible to tell which of the next 16 or so teams might be favorites for the top eight positions.  Last weekend, we saw a number of "upsets" and close meets from teams very far apart in "rank", showing just how evenly matched the field has become.

The NCAA Code Modifications are of course the great equalizer, with difficulty requirements that have remained relatively static for a good number of years, and are actually easier than in the past.  These requirements have allowed many teams to effectively eliminate most deductions from their sets.  Teams with a high number of talented upperclassmen are effectively competing very similar sets with few, if any, noticeable deductions.   And of course, early on there is considerable scoring variation between panels in different meets, and even different events in the same meet.  When you combine these factors together, it makes it difficult to discern the true difference between a 196.5 and a 195.  It can also get frustrating for fans when routines with less noticeable deductions for rhythm, body shape, position, and dynamics are deducted, especially in areas with historically permissive scoring.

OU became the first team under the new Vault Start Value table to compete six 10.0 Start Value vaults in an actual competition.  When done well, like the Sooners, it can be a great competitive advantage.  However, in several meets throughout the country, judging panels have begun to get stricter in evaluating the 10.0 start value Yurchenko vaults (1 ½, double).  In the past, the judges may have turned a blind eye to certain faults on the most difficult vaults, but with the rise in the number of these vaults being competed, we're seeing some stricter evaluation early on.  Certain judging panels are also hitting the (ever popular) Yurchenko Layout Full for these factors as well.  Even "stuck"  (especially the "NCAA stick") vaults are scoring below 9.8, if they lack in these other aspects.

The new "Concentration Pause" deduction in the USA Gymnastics Junior Olympic code has gotten a lot of attention from fans.  It's being falsely accused of being responsible for all sorts of crimes and misdemeanors.  The NCAA Rules Interpreter recently issued a reminder that the actual rule should be interpreted as follows:  On BB, a pause of two seconds results in a 0.1 deduction.  A pause of "2+ seconds" (clarified to actually mean THREE seconds or more) is a 0.2 deduction.  The first part of the rule is actually not new; gymnasts should have been deducted for these pauses last season.  What is new is the 0.2 deductions for pauses of three seconds or more -- the stakes have gone up and there is an implied importance to the pause deduction.  What can cause fan confusion and some variation in evaluation is the fact that counting of this pause begins not when the gymnast is absolutely still, but can also include shifts and adjustments of the feet, body, and arms.  Based on the first weekend of competition, there are gymnasts that likely are being docked for this, as some teams have not adequately trained to remove these pauses and non-choreographic preparatory movements.

The upside of the change is we're seeing routines with improved flow overall.  Waiting two seconds to do a gainer pike off the end is not worth the build-up.

Unchanged, and Still a Problem

There are some things in the NCAA code that still are problematic.  The big "tell" is when the skill or combo becomes commonplace, as a key way to maximize a score while minimizing risk.  Here's a few:

Lack of Variety of UB:  Many routines are variations of two or three basic routines.  Connecting skills and interesting combinations have been minimized.

The Front Toss Loophole:  Last season, the front aerial to back handspring was devalued in bonus to just the 0.1 for the D skill.  The front toss to back handspring is still worth 0.3 in bonus.  The same combo with a step-out landing is also worth the same.  The combo also means the gymnast can avoid a second D salto (required for "up to the level" or its a 0.1 deduction).  It's too much reward for too little difference, and after no code change and a summer of training, the combination is proliferating like wildfire this season.

The Straddle 1/4 to side landing:  This is a C jump on BB, raised in value by the NCAA from its value in the Junior Olympic code.  It's often combined with a switch split for 0.2 in bonus, and often performed without a clear turn or clear side straddle position.  Along with the ring leap/jump (a beautiful skill when done properly), the NCAA has elevated these two leaps to the point of abuse.

We're already seeing some exceptional routines and skills.  Here's a sampling of a few (not all videos embed properly on every platform, please click the link):

A front aerial to Rulfova by Meredith Sylvia of Auburn

Routine of the week: sophomore Meredith Sylvia kicked off 2019 with a career high on beam, scoring a 9.925 to win the event title vs. Iowa! ?

See Meredith and the rest of the Tigers this Friday in #Auburn Arena as they host LSU at 7:30 CT!#WarEagle pic.twitter.com/RZopm1BzSC

Two back handsprings to a double pike by Shallon Olsen of Alabama (sadly, the pause likely is too long)

And one you might not have seen, Sophia Hyderally of Alaska with something completely different in mood

Brenna Dowell of OU has brought back her front double pike

And while you've probably seen the routine, Katelyn Ohashi's latest viral sensation has made international headlines and even the national evening news

Tweet
Published in Articles
More in this category: « Women's 2018 Nationals: Preview Back to School: Returners & Newcomers »
Login to post comments
back to top
(c) 2001-2022 CollegeGymFans.com