Back to School: Returners & Newcomers 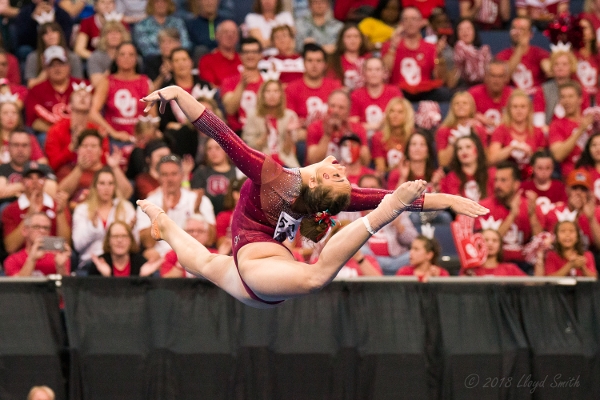 As the teams report back to campus, they will welcome their newcomers and begin to tackle new challenges.  With the Fall training season upon us, the teams will be hard to bolster their lineups and recover from their losses.  At the same time, they'll be working to refine changes and upgrades to their routines (if at all) that will be required under the 2020 NCAA Code Modifications.  Here's a quick summary of who's departed and who's new at the Top 25 programs, and a quick summary of the resulting challenges.

"Routines Lost" are counted from the last full meet of the season for the team on each event:  VT / UB / BB / FX

The defending Champions have some work to do this Fall, with some huge holes in the lineup left by the departure of Dowell and Lehrmann.  OU will be counting on Smith staying healthy and doing what she's clearly capable of doing, while others will need to step up to fill in the gaps.  Nichols will continue to lead the way, but the rest of the squad will be counting on her leadership.

LSU lost a huge amount of top-line scoring power in Finnegan, Kelley and Priessman, along with a good measure of depth.  Fortunately, the coaching staff has brought in a standout frosh class, led by Kiya Johnson and Kai Rivers.  Shchennikova was a late add, and her Achilles' injury may limit her in her first season.

The Bruins lost a huge fan favorite in Ohashi, and some steady beam work from her and Nguyen.  The Bruin incoming class has been hit by deferrals (Moors, Esparza, Chiles, possibly Madsen), but former elite Steele and transfer Sakti lead the way.  The Bruins have so much talent, however, the replacement routines could just come from the existing returners.

Denver loses five and brings in just four.  Although they lose only five routines, the impact is a little greater due to the small size of the squad.  The departed gymnasts really made up a good portion of the depth chart.  With just 11 athletes, the three frosh will need to step in immediately, led by 2019 JO National Team member Subject.   Lockhart is an expected late add, as she signed this fall.

The loss of the high scores and leadership of Karas and McLean (who missed the final part of the season) are greater than the four routines shown here.  Fortunately, the Wolverines have another super strong class this season.  Brooks, a 2019 JO National AA champion, has graduated a year early while Wilson is a three-time JO National AA champ (2016, 2017, 2019).  Together, the pair could be the next Michigan superstars.

Oregon State has lost some solid leadership and scoring potential, led by Jacobsen and Singley.  They'll look to the large returning lineup and three solid L10 frosh to step into the lineups.  Bird brings a strong potential 10.0 Start Value vault to help the Beavers losses on that event while Poniewaz is coming off a 7th(t) place AA finish at the 2019 JO Nationals.

There's no doubt that the Utes have experienced some huge losses, with the graduation of Merrell-Giles and Lee, and the loss of Skinner to her Olympic run.  These cumulative losses are the largest in the Top 25, and present many challenges for the coaching staff in Fall training.  Fortunately, the Utes have brought in one of their strongest classes in some time, led by former two-time jr. National elite champ Maile O'Keefe.  Former elite Paulson and L10s Hoffman and Rucker add further firepower.

UGA will do without the services of superstar Snead, on a team where depth has been a challenge, primarily due to lingering injuries.  Canadian elite De Jong and L10s Cashman and Hawthorne lead the way.  Hawthorne is known for some big skills while De Jong has an elite skill set that will need to be pared down for the NCAA.

Kentucky has the 2nd largest set of losses to graduation, with six gymnasts among the graduates.  They were all contributors, including stars Hyland and Dukes.  However, the Wildcats welcome a strong incoming class with a high potential for impact.  Leading the way are two-time JO National team member Raena Worley and former jr. elite and Phillippine National Team member Kaitlin DeGuzman.

Florida enters 2020 without the services of superstar Alicia Boren.  They welcome just one frosh, as like the Bruins their commit pipeline is filled with 2020 Olympic deferrals.  Former elite Payton Richards is a four time JO National Team member (2016 co-champ, 2017, 2018, 2019) with strong skills across the events.

Cal's losses are a bit understated as the Bears lost the services of star Williams during the season.  The Seilnacht twins and Shu were fixtures in the Cal lineups.  They welcome four strong L10s, led by Nevaeh DeSouza, a two-time JO National Team member (2016, 2018).  Green is the daughter of former Cal great and Stanford coach Kristen Smyth.

Bama faces a number of losses to graduation, including Armbrecht and Guerra, two stalwarts of the program.  They add another strong frosh class, led by Doggette and Waligora.  Doggette won or tied for every event at the 2018 L10 JO Nationals, while placing 3rd AA in 2019 and 1st in 2017.  Waligora is a three-time JO National team member, and the AA champ in 2017.

The Gophers have the lightest losses of any team in the Top 25, setting themselves up for another step forward in 2020.  The newcomers are led by DU transfer Quarles, a former L10 standout who has been slowed by back problems.  The Gophers will also look to boost their depth, especially on VT, where Remlinger has a high potential.

The Huskers lost eight routines from 2019, but the impact is potentially even larger with stars Crouse and Schweihofer now graduated, along with key contributor Orel.  NU brings in a strong incoming class, with Italian elite Colombo and a pair of talented L10s in Piringer and Thaler.

Boise State lost the services of superstar Remme before the end of the season, or their finish would have been even stronger.  Means was also a standout and Esmerian was a key part of the Bronco lineups.  A smaller class will face some challenges, with potential standout Elkabchi limited to two events last season.  Former jr. elite Popp will be looked upon for an immediate impact.

The Tigers head into 2020 missing some key big scores from Abby Milliet as well as from Cerio and Krippner.  They welcome another large class of seven, led by former jr elite Aria Brusch and L10 standout Cassie Stevens, a four-time Top 10 AA finisher at JO Nationals.  They'll be further bolstered by strong L10s in Sabados and Smith, in a class that could really strengthen the team.

Mizzou loses nine routines but 10 gymnasts, including some key contributors like Ward, Schugel, Kelly, Bower and Huber.  The large losses even potentially understate the total impact on depth and scoring potential from the entire ten.  Leading the way for the Tigers is Hu, who is sure to be a fan and judge favorite.  Transfer Sheremeta had a solid rookie campaign at UIC, while Scheiber is coming off a strong club season.

Arkansas had an unexpected loss in Burton, who had her finest season in 2019, anchoring the BB.  McGlone was a powerhouse gymnast in a team lacking VT and FX depth.  Arkansas welcomes two athletes, both L10s from JPAC.  Gianfagna is coming off a big AA/UB/BB/FX win at the Indiana L10 State meet, with a big 38.7 AA.

Washington's depth problems last season were compounded by the loss of star Evanni Roberson.  The five routines shown as lost here are overstated by two.  They welcome four gymnasts, with two potential 10.0 SV vaults in the mix of less-heralded specialists, including EMU transfer Smith.

Iowa State will look to replace eight routines in 2020, including four key routines from star Sievers.  They welcome up to five athletes, including elites Maldonado (Puerto Rico) and Vezina (Canada).  Vezina is known for her unusual skills on UB and BB, while Maldonado may bring a rare Randi (front 2 1/2 twists) to the NCAA.  (Note the ISU roster is unconfirmed)

BYU lost two seniors from 2019, including Marsh, a key contributor on UB and BB, and who also competed at times on FX.  Hill was a regular contributor on VT and BB.  BYU will welcome five frosh for 2020, including signee Maya Page, who was 13th AA at the 2019 L10 JO Nationals and in-state standout Allix Mason, the 2019 Region I UB champ who finished 20th AA (t) at the 2019 L10 JO Nationals.  Elease Rollins is a BB ace who should challenge for lineups immediately, having score 9.85 already in the L10 ranks.

Illinois loses the services of standout Otto and BB/FX specialist Roe.  They combined for six post-season routines, including some of the top marks.  The Illini will welcome no less than 8 frosh, led by L10 standouts Simons, Takekawa and Townes.  In total, the eight will not only increase the program's depth but will also provide some high scoring potential.

PSU loses 6 routines from five gymnasts, including key standouts Garcia, Hosek and LaGuardia.  Along with Jones, the impact on the potential depth of the program is greater than six. They welcome three newcomers, led by Canadian elite Bladon, who has a strong Yurchenko 1 1/2, and Rushlow, who is coming off a strong final club season.

ASU loses no less than ten routines from eight gymnasts, including standouts Callis and Kuhm.  The depth and scoring potential of this group will have a major impact in 2020.  Fortunately, the Gym Devils welcome seven athletes.  They are led by Canadian elite Scharf and L10 standouts Boyer, Jaslow, Redmond and Reeves.

For the other team, please check out our Newcomers section to find out who's joining the teams this year.

Tweet
Published in Articles
More in this category: « Season Debuts: Up, Up and Away Women's Code Modifications for 2019-2021 Released »
Login to post comments
back to top
(c) 2001-2022 CollegeGymFans.com