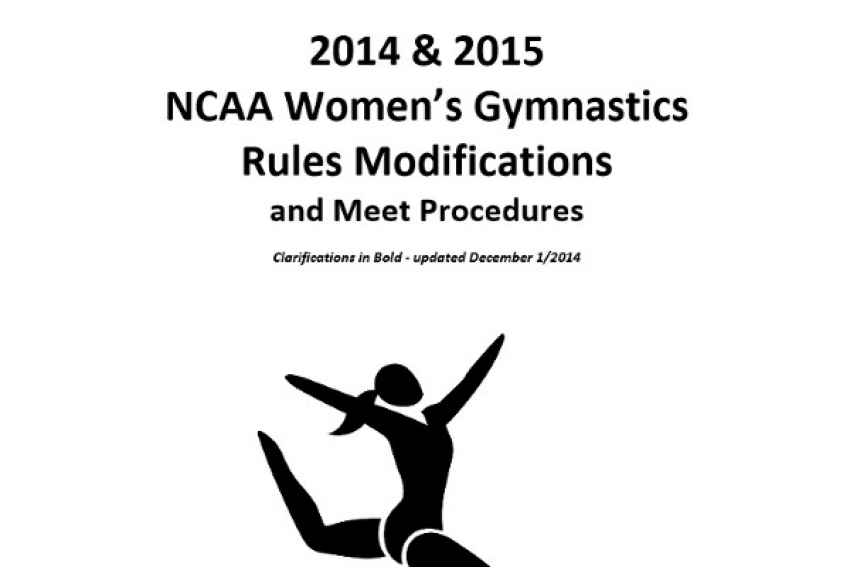 For those of you who wanted changes to the NCAA code, you'll have to wait another year.  As fully expected, the NCAA has left in place the same code for 2014-2015 as was used in 2013-2014.  There are a few possible changes, however, due to enforcement education efforts and small modifications to the USA Gymnastics rules on execution.

The NCAA follows whatever standards for execution that the USA Gymnastics (USAG) Junior Olympics program establishes.  Execution deductions include obvious things like steps on landing and flexed feet but also more technical issues like lack of amplitude and rhythm.  In the spring, the USAG Woman's Program Joint Technical Program committee set some standards and clarifications.  The most significant change that will impact the NCAA has to do with landings.  The code now provides for additional clarity and standards for the position of the feet upon landing.

Some gymnasts have adopted a rather wide landing stance (feet apart, but in a horizontal line) or a staggered position (one in front of the other).  These types of landing positions make a "stick" much easier.  Gymnasts that land with their legs more than shoulder width apart will incur a deduction of 0.1 points.  Gymnasts that land with their feet apart but less than shoulder width apart will not incur a deduction as long as they slide their heels together after landing, in a controlled pivoting motion.  If her foot lifts up or the ball of her foot slides across the mat, the judges can take a deduction of up to 0.1 points.  If her feet land in a staggered position, up to 0.1 points can be taken.  Already in videos from preseason training, you can see some of the gymnasts beginning to practice this controlled pivot.

One additional change has been added for floor routines that only contain two tumbling passes.  At least one pass must have a D salto and the other a D salto or a 0.2 connection bonus combination, or a flat 0.1 deduction will be taken.

The full set of code modifications is located here.  In addition, a set of clarifications are issued periodically and appear here.

The National Association of Women's Gymnastics Judges (NAWGJ) has also published a new set of training videos for their membership.  They provide a set of videotaped routines on each event, with a range of Start Values and scores provided at the end of each routine or vault.  You can view the videos and "test yourself" by pausing the video after each gymnast.  There are 10 examples per event.  Perhaps the biggest difference you'll notice in the example scores is the lower range of scores, when a Special Requirement or major execution problem arises.  Seeing 9.3s and 9.4s for routines without a fall was rare last year at the Division I level.  The videos serve to show that there is plenty of room to separate the scores when the proper deductions are taken.