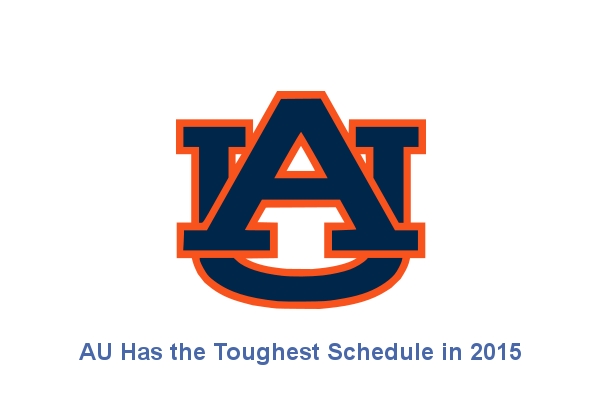 Auburn has the Toughest Schedule in 2015 AU

Auburn has the strongest schedule when compared to the other Top 12 teams in 2015, according to the annual analysis from CollegeGymFans.com.   Each year, we've calculated the relative strength of the schedule (relative schedule difficulty) for the Top 12 Teams, as determined by the Preseason Coaches' Poll.  Read on to find out how the rest of the teams fared.

As we did in prior years, we calculated the schedule difficulty index (strength of schedule) by awarding 12 points to a team for scheduling the number one team in the Preseason Coaches' poll, 11 points for scheduling number two, and so on, continuing down to one point for number 12.  No points are awarded for scheduling teams ranked below number 12.  In Table 1, we've only included those teams that are currently ranked in the Top 12.  We also count any conference meet as a matchup, even if the teams will end up competing in different sessions.

As you might expect, the SEC squads dominate the rankings.  There are no less than five members of the SEC in the Top 12, and they compete against each other at least twice during the season.  Therefore, it should be no surprise that they rise up to the top of the rankings.  And, not surprisingly, the lowest ranked team of these five, Auburn (#12), has the most opportunities to accumulate the maximum amount of points against SEC rivals.  However, it should be noted, the top teams in these rankings also tend to schedule tough out-of-conference opponents.

Unlike some sports like football, where competing against a physically stronger team can increase the likelihood of injuries, there are few reasons for a gymnastics team to avoid developing the strongest schedule available.  Attendance, in general, is related to strength of schedule, and the national rankings are not based on won-loss records.  But as it relates to scores, the results can be mixed.  The extra pressure on the athletes, combined with a potentially higher level of scrutiny (due to a high level of skill and execution of your opponent) may produce lower scores.  We've also noticed (on an anecdotal basis) that high caliber meets tend to draw a higher percentage of more experienced Brevet and National rated judges.  In addition, teams in areas serviced by major airports, near major metro areas, and in warmer winter climates tend to draw in higher rated judges.  Competing in front of large, vocal crowds or in large multi-round conference meets with a high caliber of judging may help better prepare those teams for the National Championship and Regional meets.

The ranking in Table 1 just focused on the relative position of the Top 12 teams by only considering the Top 12.  What happens when we extend this analysis to the Top 25 teams?  Well the SEC again dominates, taking the first seven spots.  And, the lower ranking teams in the SEC filter to the top.  Arkansas rises to the top because, in addition to their SEC schedule, they've scheduled OU not once but twice in 2015.

Table 2:  Strength of Schedule for the Top 25 Teams

Tweet
Published in Articles
More in this category: « Top Ten Things You Should Know About College Recruiting Strength of Schedule Analysis: UGA Strongest in 2012 »
Login to post comments
back to top
(c) 2001-2020 CollegeGymFans.com