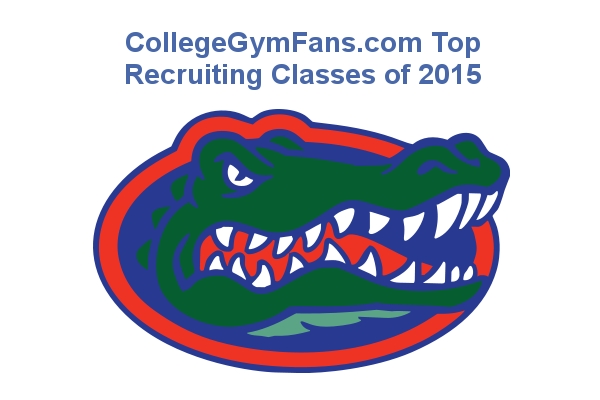 We're about to start the 2015 season, and we're once again waiting until the last moment to release our ranking of the Top Recruiting Classes.  This edition, 2014-2015, is one where we are seeing the full impact of early recruiting.  In some cases, the gymnasts who originally committed at age 16 or younger did not end up matriculating at their original college choice.  And, with scholarships opening up due to transfers or retirement, we're seeing a rash of late recruiting, early entries (early graduation), and mid-year starts.  In fact, our choice for number one had an early grad further strengthen an already strong class.

Because recruiting is happening so early, our evaluation process is based on a snap-shot of the classes as they enter college for the first time (transfers are excluded) and it projects the classes' potential contribution going forward based on performance history, abiity and condition.  From the time of an athlete's initial commit to the start of her first practice, she may have unfortunately suffered a serious injury or struggled with loss of motivation or the maturation process.  Some may fail to improve or to maintain the ability they had when they were recruited.  Others may make large improvements in ability, consistency and execution.  So, a ranking at the start of the preseason practice is the only true and fair way to assess a recruiting class.

An athlete's competition history not only reveals the skill level an athlete has already achieved, it also gives hints of any decline or improvement in ability, consistency, performance under pressure (at major meets) and execution.  Post season competition results are considered more heavily because scoring in smaller invitationals and in certain regions can be less rigorous.  If videos or recruiting profiles are available, they are considered to evaluate an athlete's skill level and execution.  Holes in competition history may suggest a history of injury, although it is scant evidence of an athlete's condition as she enters college.  Major injuries, if we know of them, are considered, but primarily to the extent that they may limit the athlete's contribution over the course of the four years of college competition.  Absence from competition in 2014 (either due to injury or changes in training patterns) is viewed somewhat negatively, while a strong improvement trend in 2014 is viewed as a sign of strong motivation to excel and a readiness to compete in college.

This ranking (while ultimately subjective) attempts to gauge the athletes at the start of the preseason and, to the degree possible, factors in preseason training reports and videos.  Ultimately, we are looking for a set of impact athletes who can consistently score in the 9.85+ range on their events and be a potential standout on their team and help propel their teams towards success.

This ranking also attempts to balance large incoming classes versus small classes with one or two standouts.  A large incoming class, even if it boasts few "superstars", can provide much needed depth that can be a huge difference maker for some squads.  In contrast, one or two high level standouts in a smaller class can have as much of an impact to a team.  While it's true that a marquee athlete can only put up four scores towards the team's total, we also acknowledge that she can elevate an entire team to a higher performance level and bring positive attention (recruiting, fan, media) to the team over the course of her career.

In constrast, gymnasts that have struggled with major injuries (knee, Achilles', back) more often than not continue to struggle or be limited by these issues at the NCAA level.  Foreign elites have tended to have longer adjustment periods, due to the major differences between the FIG and NCAA codes and the adjustment to a foreign culture.  And finally, in order to achieve standout status in the NCAA, it's becoming increasingly true that an athlete must be capable of some high-level skills on each event and/or an exceptional level of execution or style (grace, lines, expression, creativity and/or amplitude).  That being said, the NCAA code has the effect of "washing out" some of the difficulty advantages of the top elite athletes.  Thus, athletes of any level with exceptional execution, style and some high level difficulty will often outscore gymnasts with a higher level of difficulty but with small problems in execution.

This year, the ranking was extremely close between the top 14 teams, and we struggled with the final ranking.  Early entries and strong spring club seasons propelled some of the teams upward.  In contrast, injuries and changes in college plans have pushed some of the teams downward.

So, how did the teams stack up?  Here's the CollegeGymFans.com Top Recruiting Classes for 2014-2015 (click on the links to see video clips, where available):

Just Outside the Top 10

Just outside the Top 10 are a trio of squads with strong arguments for a Top 10 ranking.  They include (in no particular order), Ohio State, Penn State, UGA and Minnesota.

Ohio State's large class includes a pair of Canadian elites and a 2014 JO National Champion.  They also feature some big tumbling, like the great Ohio State class that just graduated.  Leading the way is Stefanie Merkle, who placed 4th AA at the 2014 Canadian Championships.  She's joined by Taylor Harrison, a L10 from Virginia who won the 2014 L10 JO National AA title.  She also was 2nd on VT and tied for 2nd on UB and BB.  She was 15th AA at the 2013 L10 JO Nationals.  Another L10, Alexis Mattern, another power gymnast, placed 10th AA at JO Nationals in 2014 and 9th(t) AA in 2013.  Another Canadian elite, Kaitlyn Hofland, is slowly working her way back from injury.  She was fifth AA and 1st on UB at the 2013 Canadian Championships.  The injury limitations to Hofland and some gaps in execution and skills on UB and BB kept this team out of the top 10.

Penn State has a powerhouse class that should make a huge impact on their program.  Briannah Tsang is a Canadian elite who placed 8th AA at the 2014 Canadian Championships and is the reigning Canadian vault champion (double twisting Yurchenko).  Oni Timothy is a powerful tumbler (double layout) and vaulter (Yurchenko 1 1/2) who missed 2014 with an injury, but appears to be back strong.  She was 17th AA and 6th(t) on VT at the 2013 L10 JO Nationals.  Lauren Li, who tumbles a pike full-in on FX, also has excellent form on the other events.  The WOGA trained L10 placed 2nd on FX, 7th (t) on VT and 17th AA at the 2014 L10 JO Nationals.  She also tied for 13th AA at the 2013 JO Nationals. With big vaults and big E skills on FX, this class was held out of the Top 10 due to injuries (including to Chanen Rayoza) and some execution and consistency issues on UB and BB.

UGA welcomes a large class of incoming gymnasts, led by Canadian elite Natalie Vaculik.  Vaculik placed 6th AA at the 2014 Canadian Championships, after placing 2nd AA in 2013.  Another former Canadian elite, Vivi Bibablis, dropped down to National Open last season.  She placed 4th AA in the National Open division at the 2014 Canadian Championships.  She excels on the FX, where she won the title with her double Arabian mount.  UGA's class also includes WOGA-trained L10 Hayley Sanders and powerhouse Gigi Marino, a L10 from Desert Devils.  Marino, who tumbles a variety of E skills on FX, tied for 12th AA at the 2014 L10 JO Nationals.  She also tied for 6th AA in 2013, including a 2nd (t) on VT.  Sanders, who competed sparingly last season, tied for 21st AA at the 2013 L10 JO Nationals.  UGA's class has rebounded strongly with a series of late signees, falling just short of the Top 10 in this ranking.

Minnesota's class is headlined by a pair of L10 standouts that share the same last name but are not related:  Bailey Gardner and Ciara Gardner. The former is an exceptional vaulter who tied for 4th AA (JO National Team) and 4th on FX at the 2013 L10 JO Nationals.  The latter has beautiful lines and placed 6th AA at the 2013 L10 JO Nationals.  She missed most of the 2014 season.   Both have strong long term all-around potential for the Gophers.

There are a number of impact athletes distributed at teams across the nation.  These athletes will make an immediate impact on their squads, and some of them will have nationwide impact.  Former senior international elite Abigail Milliet is at Auburn, while Toni Ann Williams, who has competed internationally for Jamaica, is at the rising Cal program.  L10 Kaitlyn Hedelund will bring her clean execution and consistency to UNC, while Paige Zaziski and Braie Speed may be future stars at Arkansas.

For a complete set of newcomers on each team and to get links to their rosters, see our newly updated listing under Recruits/Newcomers.

Tweet
Published in Articles
More in this category: « Works in Progress: Preseason Videos from Across the US CollegeGymFans.com Top Recruiting Classes of 2012-2013 »
Login to post comments
back to top
(c) 2001-2020 CollegeGymFans.com