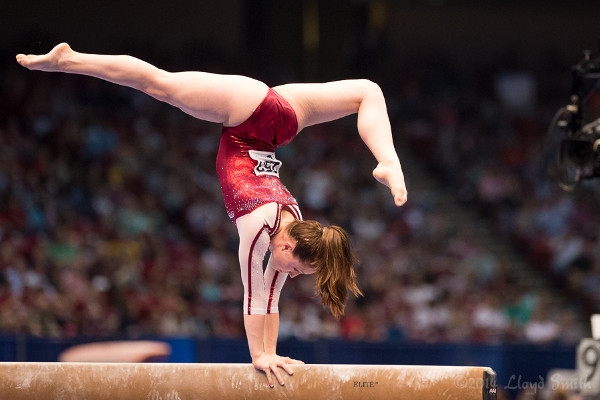 Well the first weekend of NCAA competition is in the bag and it's time to recap some key impressions from the competition thus far.  There were highs, there were lows, and a lot of questions yet to be answered.

OU Looks to Be on a Mission

OU looks to be on a mission to win the title outright this season.  Having broken through to win a share of the title last season, OU has started the season fast once again.  Their execution on UB had the look of a post-season team, and their power and amplitude on vault and floor were on full display.  They set an early mark for execution and fitness, laying down a solid challenge to the rest of the country.  Key frosh Ali Jackson and Brenna Dowell made impressive debuts, and will get only better as the season goes on.

LSU is Right With the Sooners

LSU also had a super strong start, with powerful vaulting and tumbling now complemented by steady work on UB and BB.  Key AAers Jessie Jordan and Rheagan Courville both made great debuts and appear to be two of the top AAers in the NCAA.  Key frosh Erin Macadaeg was sensational on BB, with tight execution and the confidence of a senior.  She and classmate Myia Hambrick (who had a few first meet jitters) add tremendously to the LSU BB lineup.  A few cleanup issues remain on UB (despite the high scores) and BB, and the Tiger floor rotation had a few surprising mistakes.  However, the hard work the Tigers have been putting in on their weaker events clearly showed in the debut.

Florida is Right on Track

Florida had a solid debut in Indiana, debuting a mixed lineup for their first meet.  Superstar Bridget Sloan sustained a severe ankle sprain and won't be available (if at all) until late in the season.  In a special meet located close to her home town, she posted the first 10.0 of the season, for her floaty Yurchenko Layout Full.  Although this injury is a big blow to the Gators for the regular season, they have plenty of talent left in the roster, led by senior Kytra Hunter.  Some of their Super Frosh have yet to debut in their best events, and the full strength of this year's Florida squad is not quite yet known.

Utah is Closing the Gap

Utah also had a very strong debut, and demonstrated that they are working to close the gap on the three co-favorites for the National title.  Stars Georgia Dabritz, Corrie Lothrop and Tory Wilson look to be in great condition, and the other vets like Baely Rowe have stepped up.  Utah still has some cleanup work to do, especially on UB, and is still figuring out lineups as their frosh gain experience.  However, Kari Lee and Maddie Stover made a strong impression on the Ute's weakest event, the balance beam.

Michigan, despite a number of injuries they are dealing with, debuted strongly, as did Bama, UCLA and UGA.  Each has some issues though, that kept the teams behind the four leaders.  Michigan saw strong leadership from their sophomore class, in particular Nicole Artz.  UCLA saw a standout debut from Samantha Peszek and the return to competition by Canadian Peng Peng Lee.  Bama's veterans look to step up in the leadership void left by the graduated seniors, and they also welcomed the return of star Kayla Williams.  For UGA, a few of their veteran stars are limited right now, but Brandie Jay had a strong debut.  The newcomers are also already making an impact, led by Canadian Natalie Vaculik.

Depth and Injuries Will Be a Factor

Unfortunately, news of preseason injuries is leaking out and we're seeing the impact on rosters throughout the country.  It's very early, so many of these gymnasts may still be back in top form by the end of the season.  They'll provide a boost to certain teams late in the season.  However, it is also clear that many teams are seeing a drop-off in scores in the #5 and #6 positions in the depth chart.  As the season wears on, these weaknesses could disappear or grow to be a larger problem if additional injuries occur.  With the competitiveness of the Top 25, these small weaknesses can drive a team way down in the rankings.  Even some teams that did quite well this weekend are currently operating with small numbers of active gymnast on the roster.  For example, Stanford started the season very slowly, with only five gymnasts on three of the four events.  They fielded a full lineup the next weekend and showed a dramatic improvement.

Different Approaches to Begin the Season

NU and Oregon State both had solid debuts, as they look to replace the veterans lost to graduation.  NU's frosh class had a very solid start, and will only get stronger as the season evolves.  Some teams started with big skills and a few mistakes, like PSU and AU, where E skills, high level vaults and big dismounts and releases were on full display.  On the other hand, others focused on clean execution and less difficulty (especially on floor, with single double backs and front tumbling fpr the 2nd and 3rd passes) and had fewer early mistakes, like Illinois, Arkansas and Minnesota.  As we get closer to Regionals, it will be interesting to see how the season evolves and what approach earns a spot at Nationals.   There is also a broad pack of teams just following these squads, and as the season evolves we'll see the scoring variation even out, injuries heal and frosh gain confidence.  There will be a large shuffling in the rankings over the course of the long season.

Fast Starts from Programs on the Rise

The first week of rankings always shows some new teams breaking through the Top 25.  This is especially true, this season, with major moves being made by the likes of Bowling Green and GWU.  BGSU has a strong veteran returning core and includes several international gymnasts.  We'll continue to watch how they develop over the next several weeks.  GWU had an impressive showing this past weekend, knocking off programs that have traditionally finished higher in the standings.  They've been especially boosted by a strong set of newcomers, including frosh Jillian Winstanley, a top L10 in the club ranks (The 2013 L10 JO National champion on VT).   And last year's breakthrough story, Cal, has had a solid start, with frosh Toni Ann Williams making a strong early impression.   They are currently missing sophomore Jessica Howe, and will look to get her polished sets back into the rotation later in the season.

During the preseason, the Judges and Coaches have worked to establish standards in judging to help reduce the variability in "toughness" of scoring.  They've published videos of routines and provided ranges of typical scores.  This has resulted in some meets seeing tighter scoring than what certains fans are used to seeing.  In a few other cases, we actually saw a slight loosening.  However, there is a risk that this effort to establish consistency in judging may have actually resulted in a wider range of variation.  Or, this variation has become more noticeable to fans (and teams) used to more lenient scoring.  These fans may be left wondering why the same routines are scoring lower.  For a perfect example of how variation can impact scores, just check out the videos of two meets held at CMU.  At the first meet, the tighter scoring (on vault in particular) was compared by CMU Head Coach Jerry Reighard as something akin to what he's used to seeing at Regionals.  The next week, with a different panel, the scoring was noticeably looser on several events (and the execution improved).  This is, of course, entirely out of control of the coaches or the athletes.  We'll likely have to wait several weeks as this variation has time to to normalize.  In another example, at Oregon State, many fans were upset with what they perceived as overly strict scoring, especially on the floor.  However, the two judges on the event were highly rated Brevet/National judges who are "regulars" to judging meets in Corvallis and top meets nationwide.  You can safely assume that the targeted standard for judging strictness was applied to judging the meet.  We'll see if this standard holds or if some other level of evaluation strictness evolves.

This past spring, the committes that control the evaluation standards for execution in the USA Gymnastics Junior Olympics program made a change in the way "stuck" landings are evaluated.  Changes in the way executation is evaluated are adopted from the JO Program by the NCAA, even though the high level code requirements are different.  (We highlighted these changes in a prior article).  In past codes, a gymnast that lands with her feet more than shoulder width apart would face a deduction.  This is still true.  The gymnast will also face an automatic deduction (up to 0.1) if she lands with her feet staggered, one in front of the other.  However, the standards now also include a new execution standard for when a landing is made with the feet apart, but less than shoulder width apart.  The gymnast now must slide her heels together, without lifting her feet or sliding the balls of her feet, and join the feet together in a controlled extension.   Otherwise, a deduction of up to 0.1 points is taken, as long the dismount was otherwise "stuck".  So, don't be surprised if you see "stuck" landings being deducted.  This new change is not yet being evenly enforced by the judges, nor is it being executed in the prescribed fashion by many gymnasts.  Gymnasts have it long ingrained in their minds to hold their feet in place, and not slide any portion of their foot.

Tweet
Published in Articles
More in this category: « Know the Code: 2014-2015 Women's NCAA Code Modifications Weekly Recap: Mixing It Up »
Login to post comments
back to top
(c) 2001-2020 CollegeGymFans.com