Weekly Recap: The Field Bunches Up 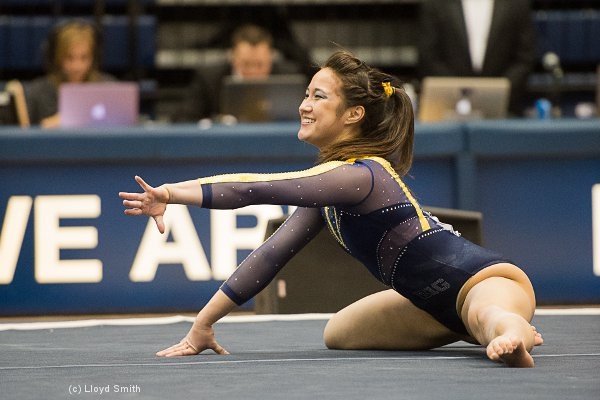 Another weekend has passed, and we've see more questions open up about the season as the rankings have shuffled once again.  Team that started strong have since wobbled a bit, while others with some early stumbles have steadily climbed.  And we've seen some others that have been steady and consistent in the meets thus far, and have solid Top 25 positions to show for it.  As 197 becomes the new 196, let's see how the week has gone....

The Pack Bunches Up

At the start of the season, it apeared as if a few teams were set to break away from the rest of the field.  Instead, we've seen the field bunch up.  After the first week, 3.7 points separated Top 25 teams.  Now, three or four weeks into the season, that very same gap of 3.7 points spans the Top 44 teams.  Less than 2.4 points now separates the Top 25 teams, and less than 0.8 points separates team #8 (Arkansas) to team #22 (SUU; actually #23 if Cal's score entry had made the cutoff for entry at Troester.com).  0.8 points is little more than the deduction for a counting fall.  In fact, a counting fall usually costs a team more than the 0.5 point deduction for the fall; they may also lose much-needed bonus points or have other execution issues related (or subsequent to) the fall.  Thus, we have a large pack of teams that are separated by either a fall or some inconsistency.  However, we'll continue to see these rankings shuffle up until the time the rankings shift to the Regional Qualifying System (RQS), when we'll see some bigger shifts.  Right now, the rankings are based on averages of every meet.  At mid season, we shift to the RQS.  To calculate the RQS, you must take the top 3 away/road scores of a team and combine them with the next three highest scores.  You toss out the highest and average the remaining five to get the RQS.

While everyone expected strong starts from the likes of Florida, OU and LSU, they are joined in this category by strong starts from the likes of Michigan, Arkansas and Boise State.  These squads all suffered some graduation losses (in the case of Michigan and Arkansas, quite heavy).  However, by having consistent performances and counting fewer falls, they are rising early in the pack.  Michigan in particular has seen their returners step up to fill the void of the departed stars or injured gymnasts, especially sophomores Nicole Artz and Talia Chiarelli and senior Sachi Sugiyama.  In addition, the Wolverines have seen a strong debut from newcomer Brianna Brown.  Arkansas has been led, as expected, by Amanda Wellick but overall the squad has learned to hit their routines and avoid major mistakes.  Frosh Paige Zaziski is an early standout, especially on UB and VT.  Similarly, Boise State has seen strong performances from veterans Ciera Perkins and Kelsey Morris, and a solid debut from top frosh Liane Josbacher.  There are still many meets to go, and we'll see how these teams will be able to hold their own against a rapidly improving pack.

The Big Three preseason favorites continue to plug away at the season.  For OU, despite a few stumbles last week, they returned home and hit "lights out" to post a 197.85.  Their consistency, power and grace are proving to be a strong combination and they rightfully own the top spot this week.  They have a large number of veterans, plus five routines from their frosh, including three from standout Brenna Dowell, who received her first 10 this past weekends.  They still experienced a few issues last weekend on FX, or a 198 would have been achieved (in January!).  Just behind OU is LSU, who has experienced a few random stumbles, in particular from the frosh, as the newcomers get adjusted to the new season.  Last weekend they went with almost an all veteran lineup, but earned some sub 9.8 scores as their depth has been tested.  You can look for the entire squad to improve as the season wears on, as the few small problem details in execution get corrected and landings improve on vault and floor.  For Florida, their loss to Bama is a reflection partly of the youth of the team and some early issues with execution and inexperience.   And of course, they miss their superstar Bridget Sloan, in particular on UB and BB. Their small detail work, especially on parts of the lineup on UB and BB, still requires some work.  There are missed handstands, flexed feet, and body position issues in dismounts that are uncharacteristic of past Gator squads.  In addition, the Gators had nine routines from frosh in the lineup against Bama, compared to the Tide's two, and the nerves and lack of collegiate experience has showed at times (and has been nonexistent at others).

We are seeing a lot of teams continue to throw true FIG "E" level saltos on the floor, including double layouts, full-ins, double Arabians and triple fulls.  However, besides some slick new choreography, we're seeing some other interesting combinations and skills.  Florida's Kennedy Baker debuted a Dos Santos last weekend (pike double Arabian).  We also saw double fronts competed by PSU's Emma Sibson and OU's Brenna Dowell.  Utah's Georgia Dabritz is still opening with a pike full in and dismounting with a triple full.  LSU's Jessica Savona once again opens her routine this season with a back layout 1 1/2 twist stepout to a round-off, back handspring, double back; she also adds a full-in for her second pass.  And UGA's Brandie Jay continues to throw a rare "full out" -- a double salto with a twist on the second salto, but she's doing it earlier in the season this year.  In a welcome bit of retro tumbling, Arizona's Jessie Sisler dismounts with a clean back layout with a double twist to immediate punch front tuck.  We're still waiting to see if someone will connect a similar pass into a back to back tumbling run -- a combination that was popular in the 90s.

Some seniors have already put the NCAA on notice that they intend to end their careers with a bang.  Utah's Georgia Dabritz, UCLA's Samantha Peszek, LSU's Jessie Jordan and Florida's Kytra Hunter all appear to be in the best shape of their collegiate careers.  These four also happen to be the nation's current top four AAers.   Hunter's polish and amplitude has never been better, and her Yurchenko 1 1/2 seems cleaner and higher this season.  Peszek has battled injuries in the past, but has never been this prepared so early in the season, in her entire NCAA career.  Pacing is key with her, and she skipped floor this past meet.  She's already showing skills like a tuck-full on BB and a double layout on floor, skills that used to be reserved for rare occasions.  Dabritz continues to push the envelope of difficulty while finally conquering the BB this season.  If she can hold her place in the deep Ute BB lineup, she may become a threat for the National AA title.  LSU's Jordan is the sometimes overlooked senior that consistently delivers some of the highest levels of execution on her squad.  What she lacks in tumbling difficulty she makes up for in clean execution and beautiful lines on all four events.

What is the significance of the line, "Since 2004"?  We have a feeling that we'll be typing this phrase more often this season.  So what is important about the year 2004?  This happens to be the last season before the NCAA made major adjustments to the code modificatons that form the scoring rules for collegiate competition.  As a result, many teams have school records that date back to this time frame.  The NCAA code has remained relatively static for the last five+ seasons, even as the ability and execution of the athletes across the nation, at all levels, has improved.  In addition, we're seeing quite a bit of loose scoring and missed deductions, which is all the more apparent when nearly every meet is available for viewing online.  So, you may see us note that a team's event or team total is the highest it has achieved "since 2004".  By the way, in 2004, it took an RQS (Regional Qualifying Score) of 196.785 to be a Top 18 seed.  The #12 team that year recorded an RQS of 196.99.  One unfortunate team even scored a 196.85 at Regionals and still did not qualify to Nationals.  To play on a popular phrase, "197 is the new 196".

Tweet
Published in Articles
More in this category: « Weekly Recap: Mixing It Up Weekly Recap: Scoring "201" »
Login to post comments
back to top
(c) 2001-2020 CollegeGymFans.com