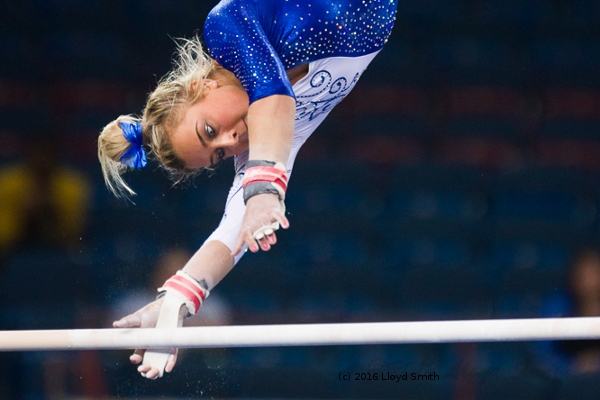 For 36 teams, the season has built up to one day, the Regionals and the 12 teams that will qualify to the National semi-finals.  There are six Regions and the top two teams in each Region will qualify to Nationals.  Through the proliferation of online video and Conference TV networks, we've been able to follow the progress of every member of each and every Regional.  Here's how the field shakes down.

Outlook:  #1 Oklahoma looks to the Seattle Regional as a warmup for the NCAA Finals.  They've navigated an undefeated season without a major meltdown, and there's no reason to expect that they'll experience one now.  Look for stars Maggie Nichols, Chayse Capps and the rest of the Sooners to stay focused on the finals.  The real battle here is for the second spot:  #12 Kentucky had the misfortune to get paired with #13 Washington, the host of this Regional.  Regional hosts have a built-in advantage due to the comfort of the home arena, the support of a home crowd and not having to travel, especially across three time zones like the Wildcats.  This advantage has been neutralized somewhat by the randow draw that gave the #2 Regional seed the favored Olympic order.  The hosts, on the other hand, need to end on the dreaded BB.

The two squads match up well, with just 0.15 points separating the two teams when host UK triumped over the Huskies a few weeks back -- with the Huskies suffering two large problems on VT to close the meet.  A mid-size counting error could make the difference in the meet, and Washington will seek to eliminate the nervous errors that have sporadical cropped up on various events.  For the Wildcats, they'll depend heavily on frosh star Mollie Korth and three sophomore AAers.  The Wildcats will look to build an advantage on VT and UB and then hold off the Huskies on their weakest event, FX.  The Huskies are coming off a 3rd place finish at the Pac-12s and will look to stay consistent in order to challenge the Wildcats.  While Kentucky has some potential high scoring routines at the end of the lineup, Washington will look to leverage its edge in depth.  If either team makes a mistake, the Stanford Cardinal will be looming.  Hampered by injuries and a slow start, the Cardinal have executed their strategy to improve and peak in time for the post-season.  Led by Elizabeth Price, the wounded Cardinal could still be dangerous for either squad.  USU and BYU have made strong strides this past seasons and have closed the gap on the top tier.  However, they'll need help from UK, UW and Stanford in order to advance.

Outlook:  LSU will look to continue their march to a showdown with OU in St. Louis.  Barring unforseen meltdowns, they should advance easily from the Lincoln Regional.  Stars like Ashleigh Gnat and Myia Hambrick have pushed the Tigers to new highs, including the SEC Championship.  The real pressure cooker will be Boise State versus host Nebraska.  Boise State is coming off a stellar season, combining some big gymnastics with consistent performances all season long.  They are one of a few teams that throw four 10.0 start value vaults (three Yurchenko 1 1/2 and one pike front half) and five Es on FX (two front double fulls, two full-ins, and Arabian double front).  Their strongest event is perhaps UB, where their clean lines and strong dismounts have scored well all season long.  They will look to start off strong and then hold off the Huskers on BB and FX.  It's on the latter two events where execution and some form issues early in the lineup can hold down their scores.

Nebraska will look to ride the support of the home crowd to knock off the Broncos.  The Huskers have gotten stronger as the season has progressed, boosted by the return of Ashley Lambert and the ongoing excellence of frosh Taylor Houchin.  NU has also added some key 10.0 VTs and big E skills on FX, and also excel on the UB.  The key for this squad, however, will be the BB, where they will end the meet on Saturday.  While they rank #13 or higher on every event, they rank just #22 on BB.  Lurking behind these two are Arizona, Iowa State and Minnesota.  Arizona is getting back some gymnasts from injury at just the right time, while Iowa State has closed the season with an impressive series of 196+ meets.  Minnesota has battled the beam and UB all season long and will look to stay consistent and finish strong.

Outlook:  Host Florida will look to avoid major mistakes and move into the National semi-finals.  They were fortunate to land the easiest Regional of the six, with just three of the six squads in the National Top 29.  The Gators have been steadily improving the last several weeks, with the return of stars Kennedy Baker and Alex McMurtry to the AA.  The Gators have had some depth issues this year, and having the stars in place relieves some pressure on the #5 and #6 slots in the lineup.  Florida is primed to advance easily, barring a major disaster.

UGA will look to hold off Missouri for the second slot.  Georgia has battled the Beam once again this season, and fortunately for the GymDogs they are competing in the Olympic order.  A strong start on VT and UB could help relieve the pressure as the team rotates to the dreaded BB.  The Gym Dogs also hope to have frosh Rachel Dickson and sophomore Sydney Snead at full health for the Regional meet.  Dickson was injured at the SECs and Snead has battled back problems.  If UGA should falter, Missouri could be ready to step into the qualifying spot.  Led by Britney Ward, the Tigers struggled on UB at the recent SEC Championships.  They'll need a stronger performance overall and some mistakes from UGA in order to advance.  The loss of star Morgan Porter hurt their depth, but the squad has rebounded nicely.  PSU is coming off an emotional rollercoaster of the season and is getting stronger each week.  They'll look to build upon this season.  UNC finished strongly to qualify to Regionals and features a young squad that is working to develop their depth.

Outlook:  Pac 12 Conference Champion Utah heads the field at the Fayetteville Regional.  Like most of the other teams in the Regional, the Utes have battled past key injuries to rise up the rankings.  The Utes are on a roll, and are coming off their strongest meet of the season.  Led by frosh sensation MyKayla Skinner, the Utes look to confidently hit all four events.  With a hit meet, they should advance with no problem.  #9 Denver will have a battle on its hands with the #16 Cal Bears.  Denver has maximized their scores from a relatively small lineup, led by frosh Maddie Karr.  She's capably supported by stars like Julia Ross and Nikole Addison.  The Pioneers have spent much of the season competing just five athletes on VT and FX, so they know what it's like to hit under pressure.

Cal has also weathered a series of injuries to their stars, most notably Olympian Toni-Ann Williams, to put up some solid scores at the end of the season.  They stumbled a bit at the Pac 12s, and will look to maintain consistency at Regionals.  They will end on BB, which could be an issue for a squad that counted a fall in their most recent meet.  And due to their injuries, they may need some help from DU to advance.  If both teams have their struggles, look for Auburn, host Arkansas and CMU to take advantage of the opportunity.  Auburn has struggled a bit this season with inexperience, while Arkansas lost key AAer Amanda Wellick to injury.  The three teams will need sub-par efforts from the others to sneak through.

Outlook:  #5 UCLA leads the tough field in the Champaign Regional, which also features Oregon State, Iowa, Illinois, EMU and Ohio State.  The Bruins are led by Olympians Kyla Ross and Madison Kocian, and stars Peng-Peng Lee and Katelyn Ohashi.  This quartet gives the Bruins genuine "10.0" power at the end of most lineups.  However, it's the front part of each lineup that has been problematic for UCLA, where mistakes can sometimes hold the Bruins back.  They'll need to stay consistent and avoid a repeat of last year, where a near meltdown on UB almost cost the Bruins a spot at Nationals.  However, the Bruins have been getting stronger at the end of the season, as gymnasts like Angi Cipra have returned back from injury and as endurance has improved on FX.

Oregon State has been powered by the return of Katyanna McMillan, Erika Aufiero and Dani Dessaints, who were all hampered by injury in 2016.  Along with Madeline Gardiner, this trio has propelled Oregon State to a #8 National rankings.  This experienced squad has 15 of 24 routines coming from seniors, and they'll be focused on returning to Nationals.  Oregon State has a clear lead on the rest of the pack, but they'll be challenged by host Illinois.  Illinois is coming off a runnerup finish at the Big 10 meet, where they hit a season-high and defeated Iowa, the third seed here.  Iowa has improved steadily these past several years and has solidly hit in the 196s all season long.  With a strong veteran core and some clean-lined frosh newcomers, Iowa will be looking to pull an upset.  Illinois is known for their consistency, and appear to be peaking at the right time.   They are led by Lizzy LeDuc and the return of Mary Jane Horth, who was injured last season.  EMU has improved steadily since the start of the season, and will look to finish the season with a new high.  Ohio State had a strong start to the season but mistakes and execution issues (especially on UB) have held back the squad.

Outlook: Alabama and Michigan lead the Morgantown Regional.  It's the Regional with the greatest spread between the second seed and the third seed, forming a built-in challenge to any upset.  Bama had a strong meet at the SECs, with star Kiana Winston returning to an AA role.  Frosh Maddie Desch continues to improve while defending NCAA VT champ Katie Bailey has excelled on three events.  With a large and deep squad, Bama will look to stay consistent, especially on the BB and FX.  The Wolverines are led by stars Nicole Artz, Talia Chiarelli, and Olivia Karas.  The Wolverines struggled at times early in the season with inconsistency and depth, in particular on UB.  But the return of Brianna Brown and some more meet experience has enabled big strides on the event.  Michigan excels on VT and FX, with some big E skills and solid 10.0 VTs.

SUU is the third seed here and they'll need help from the top two in order to advance.  They'll also be battling GWU, who has hit a steady stream of scores in the 196 range.  SUU had a strong start but lost key AAer Danielle Ramirez, a key end of the lineup performer.  They are led by Tyly Bozzuto, Autumn Jorgensen and Stacie Webb.  The Colonials continue to be led by stars Alex DeMoura, Cami Drouin-Allaire, Chelsea Raineri, and Jillian Winstanley.  They've stayed consistent all season long, and have made steady progress the last several years.  Host WVU will look to maximize their home gym advantage and break into the top three, while Kent State will look to build upon this season.

Tweet
Published in Articles
More in this category: « Championship Week: Race to Regionals Showdown in St. Louis »
Login to post comments
back to top
(c) 2001-2022 CollegeGymFans.com