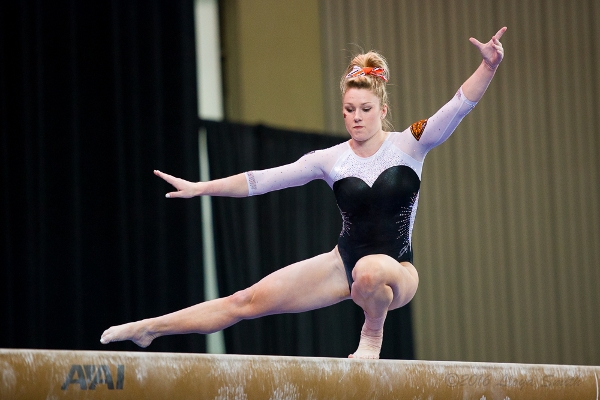 Twelve teams have made it to St. Louis, and will battle it out over the weekend for the National Championships.  It all starts Friday, and we'll have live links up as usual and links to all the coverage as it happens.  On Friday, we start with the Preliminaries, with six teams looking to be one of three teams that advance from each session to the Super Six finals.

This year, the luck of the draw, the seeding process and the way the teams battled it out resulted in two semi-finals that are split along conference lines.  In the first Session, we have the top four Pac-12 teams versus the top two from the Big 12.  In Session 2, we have the top four SEC teams against two teams from the Big 10.  Only three from each session will advance, and the pressure will be intense.

Keys to Advance:  OU is a clear favorite to advance and win it all.  They'll be looking to stay consistent and treat Friday as a workout, in order to stay fresh for the Super Six.   The real battle will be for individual titles, which will be settled on Friday.  Maggie Nichols is the clear favorite for the AA, and her presence in the early session will put a cap on scores in this session.

What Could Go Wrong:  OU has managed to avoid any serious issues this seaso and could even afford a fall on Friday.  BB and UB (possibly FX) are the most likely culprits for a meltdown, but it's not very likely.

Keys to Advance:  Utah will need to stay consistent and avoid any major meltdowns to contend for a spot.  However, that may not be enough with such a strong field and they'll need to avoid medium sized mistakes as well.  They'll need to stay clean on UB and BB, and avoid steps on dismounts and any nervous mistakes.   MyKayla Skinner will look to chase Nichols in this early session, and is certain to set a high mark on FX.

What Could Go Wrong:  Utah's Kari Lee is still coming back from injury and we'll see how many more events she'll be able to do this weekend.  Utah is reaching deep into the depth chart, and any errors from the Top 5 can put pressure on some of the less consistent routines, especially on BB.

Keys to Advance:  UCLA will also need to stay consistent and avoid any major mistakes.  BB is a strength as is the lower half of the UB lineup.  UCLA has the potential for some very high scores from the likes of Madison Kocian, Peng-Peng Lee, Katelyn Ohashi and Kyla Ross that will keep them in the running.

What Could Go Wrong:  UCLA has been giving up ground on landings on VT and FX and with mid and large errors on UB.  These are three critical events for the Bruins.  In each of the events, it's the #5 and #6 routines that are key, as they've had the tendency to post 9.7s in these slots, rather than the 9.9+ scores in their top positions.

Keys to Advance:  Denver has been remarkably consistent all season long, using a limited roster and hitting their sets at a rate that rivals OU's.  They'll need to keep on hitting their sets, and will need to control their landings on FX, their weakest event.   Frosh Maddie Karr leads the way, and calm, consistent performances from the frosh will be key.

What Could Go Wrong:  Denver has made it all season with a minimal roster, at times competing only five gymnasts per event.  The return of Diana Chesnok has been a huge plus, but any unexpected injury hurts this squad more than any other in the Top 12.

Keys to Advance:  Washington is celebrating it's first return to Nationals since 1998.  They'll need to keep building on that success by hitting in the semis, especially with landings on VT and UB.   They may need help to advance, but will help their cause the most by keeping distanced from the pressure of the Top 4.

What Could Go Wrong:  Washington will juggle it's BB lineup once again with Malory Rose's Kerry Strug-like one legged landing at Regionals (she tore her ACL on her dismount).  Their depth has allowed them to weather three ACL tears and other various injuries throughout the season.  But in reality, it's vault where UW's emotions can get in the way of hitting six for six.

Keys to Advance:  Oregon State is at their best when they confidently hit their sets, and minimizing any small errors.  VT is their strength, with three 10.0 SV vaults, but UB and BB are not far behind.   It's a senior laden group, and they'll need all of the stars:  Erica Aufiero, Madeline Gardiner and Katyanna McMillan in particular, to shine.

What Could Go Wrong:  Small errors and mistakes can creep in for the Beavers, primarily on UB and on FX, where tumbling execution can sometimes be a challenge.  This was one of their problems at Regionals, and they'll want to address this for the semi-finals.

Keys to Advance:  LSU will need to avoid major trouble and they are all but assured of a spot in the National Final.  This season, the Tiger's lowest mark was a 197.425 (their next lowest was the 197.45 at Regionals, however).  Ashleigh Gnat will be a leading contender for AA honors while Myia Hambrick or Sarah Finnegan could surprise in the AA.

What Could Go Wrong:  In any pressure situation, UB and BB can be a challenge.  This was the case at Regionals, where a fall and a 9.675 figured into what is normally an outstanding rotation.   A solidly hit rotation here will not only allow the Tigers to advance with ease, but it will give them confidence heading into a showdown with the Sooners.

Keys to Advance:  The Gators seem to be peaking at the right time, rotating their stars into AA roles after resting them for various reasons during the season.  Another consistent meet will let the Gators advance.  Alex McMurtry and Kennedy Bakers are leading figures in the AA, and having both hit will be key.

What Could Go Wrong:  For the Gators, depth in the 5-6 position has been an issue at times, in particular with falls on BB & UB and a general lack of consistency from their frosh.  A series of mistakes on Friday could allow two teams to pass by the Gators.

Keys to Advance:  Michigan has continue to rise throughout the season, and looks to be peaking in time for the post-season.  The addition of Olivia Karas and Brianna Brown on the UB has helped shore up an event that held the squad back.  This was an event with some execution and consistency issues.

What Could Go Wrong:  Mistakes can crop up from time to time for the Wolverines, especially on UB and BB, but even on the FX.  The Wolverines have a drop-off in their #5 and #6 scores on each event, and so the stars must hit in order to maximize Michigan's scoring potential.

Keys to Advance:  Bama has weathered a number of injuries and has worked through some peaks and valleys this season.  Peaking and hitting consistently will be needed for the Crimson Tide to make the Super Six this time.   Kiana Winston will lead the way and could challenge for top honors on any number of events, including the AA.

What Could Go Wrong:  Bama was shakey on BB and VT at Regionals and finished 2nd.  Small mistakes can sometimes snowball with any team, and Bama has had its share this season.  Because the Tide have fewer 10.0 SV vaults than the others, they'll need to make sure they minimize their landing deductions.

Keys to Advance:  UGA has missed the services of frosh Rachel Dickson and having her healthy on the leg events would be a big boost.  The entire team has been building throughout the season, as they gain confidence and experience.   Sydney Snead has been limited by a back injury, but has been a force in the post-season.

What Could Go Wrong:  With UGA, it's all about the Balance Beam.  More so than any other team at Nationals, the GymDogs have battled the beam and have experienced a number of sub-par rotations.  They'll need to hit here in order to advance, but they'll also need a season-best on the other events as well.

Keys to Advance:  Nebraska will look to stay strong and consistent, and take advantage of any mistakes from the lead group to slip by and advance.  They'll need strong performances from frosh star Taylor Houchin and senior Ashley Lambert, who has rebounded so well from preseason surgery.  The Huskers excel on VT, with up to four 10.0 SV vaults.

What Could Go Wrong:  Balance Beam caused a sub-par performance at the Big 10 meet for the Huskers.  However, at Regionals, they successfully used the event to secure their win over Boise State and advance to Nationals.  Another consistent performance will be key for Nebraska.

OU's Maggie Nichols is the clear favorite for the National Title, but she'll be hampered by her placement in the earlier session.  Traditionally, scores in the evening session are higher than in the earlier session.  However, a gymnast with the reputation and dominance of Nichols will set an early bar for the competition.  The judging panels won't fell compelled to "hold back" scores for the evening session, knowing that a hit routine from Nichols will be one of the top performances of the day.  In this session, we should also see a challenge from Utah's Mykayla Skinner and UCLA's Madison Kocian.

In the second session, Florida's Alex McMurtry and Kennedy Baker will be joined by LSU's Myia Hambrick and Bama's Kiana Winston as leading challengers.  There will be surprises, however, in both sessions as it becomes impossible to predict who will rise to the occasion.  The later rounds and the last rotation have a built-in advantage to garnering high scores.  It's possible some gymnasts will enjoy this boost in the Evening Session.